Spotlight: The Lowdown on Tor Gaming

Big things are happening in the world of Relics, news of an exiting new project has gradually filtered out from Tor Towers! I have managed to prise owner Gavin Moorcroft away from the grindstone to give us the lowdown on what's going on:

Over the last 12 months we have seen many new projects coming out of Tor Towers including TGC
and gamingfunder, what has been the main drive behind such projects?
Ants in my pants I think! Seriously, my head is spinning with ideas for this and that. If I don’t explore them then I will likely go mad. On top of this, my business partner (Colin) is also a similar type chap and he likes to get his hands dirty and loves to code so it just makes perfect sense for us to explore these ideas. In addition, each of the projects is designed to bring in some residual revenue that goes to sustaining us and means we can put that money into other thing like Tor Gaming and other products. It means we won’t have to rely on solely Tor Gaming to support us which should, in theory make things easier for us....
The kickstarter campaign early last year was very successful, funding a lot of new releases for the four factions, how did you find the whole process?
It’s similar to any other project management situation – but with the added element that you have to be a lot more open about progress. Most projects that go on in companies are closed door events. The only progress the people outside the company see is what the company want them to see. With Crowd funding, you are really opening your doors to every one of the backers. This makes you think more about the decisions you make as you now have a whole load of people who can stand up and call bullshit on what you do! But, I actually find that a bonus not a boon as it means you can’t take the short cuts. I also like the fact I have a lot of people to provide feedback and really help guide the project because they have put their money on the table so why shouldn’t they?
How long do we have to for gamingfunder campaign? Will it be similar to the ks one in that each goal will fund a release for each faction?
The GamingFunder.com project is scheduled to go live on the 5th May 2014. We have set the initial target quiet low and it covers the Gaming Funder Exclusive Mercenary sculpt and the new Portal Terrain piece we are producing. Then, each stretch goal will add two new packs of models, with two factions getting one pack each from that stretch goal. The factions are paired as Britanan/Orcnar and Nuem/Vaettir. So, one stretch goal will provide a new pack for the Brits and Orcnar, and then the next stretch goal will cover the Nuem and Vaettir. Then back to the Brits and Orcnar. Rinse and repeat. 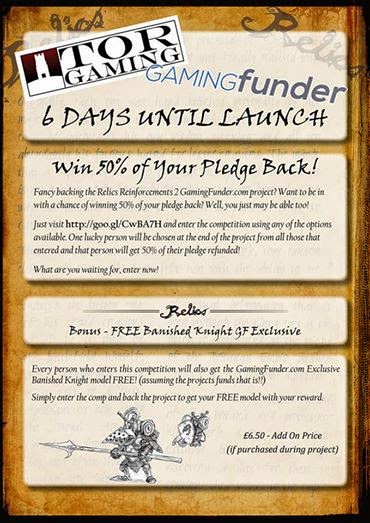 There has been plenty of talk and interest regarding new factions for Relics; the C'thu and the Ridend, are you planning to bring them to life with this campaign?
We did think about it be decided we didn’t want this project to get swapped with too much work for the sculptor. As such, we plan on running separate campaigns for them in the near future, with the Ridend up first. That way, those campaigns can be very focused and deliver 100% what the backers want with each and every stretch goal. We also felt it would do them an injustice to have them lumped in with the existing factions. The new boys deserve to have the spotlight all to themselves! 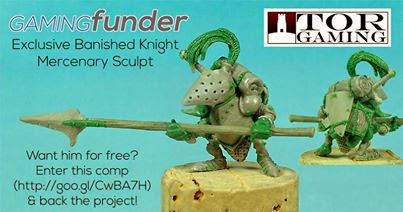 ﻿
We have recently seen Christian's concepts and Kev's WIP of the "Banished Knight", the first mercenary model for Relics, he looks fantastic by the way, can we infer there will be more of them coming soon?
You can and there will. Relicia is a massive place, far larger than our own globe and as such the numbers of nations that inhabit it are countless. The current four nations, and the two to come are just a pebble dropped in an ocean when compared with the potential we can explore for new Relicia nations. But that costs money. Some nations can be as big as the current playable nations and number in hundreds of thousands (or even millions) in populace whilst some number just thousands and have no standing army.
Each time you develop a new nation (faction) for a game, you have to invest a lot of money, time and effort in the process and at the end of it there is no guarantee it will be received well by the players.
As such, the plan behind the Relics Mercs is for them to be a vehicle for us to try out some of these new nation ideas we have without having to spend the full cost of investment in time and money to do so. Each Merc will represent a new potential nation in the world of Relics. And any Mercs that are very popular with the players will be looked at with a possibility of having a fully playable force created for them. But, the long term behind the Mercs is for them to become a fully playable force themselves! Once we have enough options out for them, we will do some commander Mercs – turning the force into a playable army of it’s own!
What else can we expect from the campaign for the existing factions? Any new profiles on the
horizon?
The initial target of the project is to fund the production cost of the new Portal Terrain piece and to fund the project exclusive model. Then, if successful enough the project will fund ALL the remaining profiles from the existing book plus Lingering Effects pebble counters and Faction Objective Markers. If we manage that, we will then hit new, unseen profiles for all the four factions such as the Orcnar Shaman and the Nuem Brazen Bull. We have a good number of profiles in reserve so we should be fine if we busts through all the existing profiles! 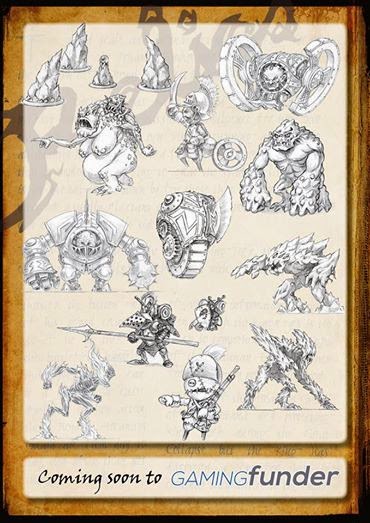 ﻿
How are plans going for another tournament?
It’s on the list but with the project about to kick off we aren’t rushing it!  One of the biggest issue we are facing with the idea of the next official run tournament is location. Since the last event, we asked for a lot of input about events and travel distance as we felt the previous location wasn’t best suited for good enough coverage of the UK. Seems we were right as a very large proportion of people weren’t willing to travel more than 2 hours max for an event. Although the limit of 2hours max did surprise us a little and that makes picking a location that suits the most people even harder.
Best of luck for the campaign, I will be covering it heavily of course on the blog and my step son
and I will be backing it to expand our Orcnar and Nuem armies! Thanks for your time Gav cheers
Many thanks for taking the time to send in you questions! And many many more thanks for committing to back the project and help support us! We very much appreciate the support of the Relics fans much more than you may believe!
Thanks,
Gavin
Posted by Ridmasta at 12:24 No comments:

Next up are the Har Ganeth Executioners, badass swordsmen with massive double handed weapons! 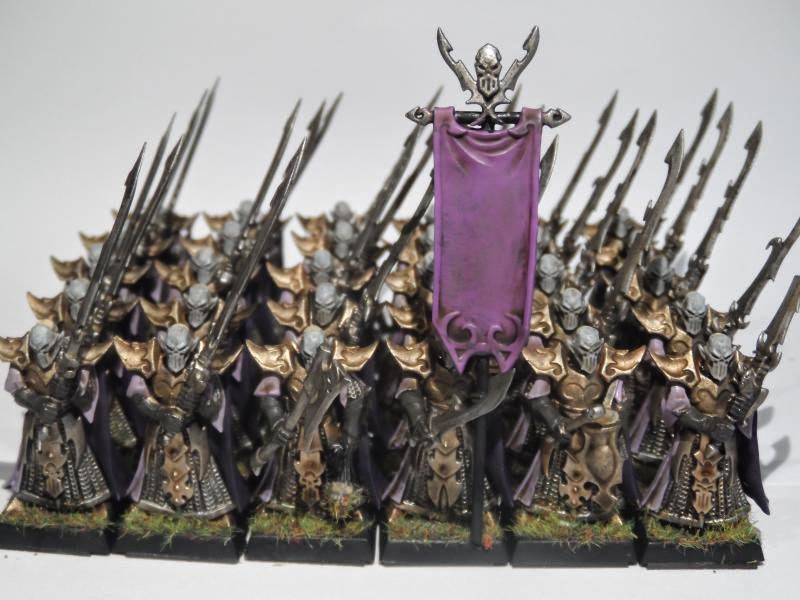 That's the two biggest units finished so next up will be some Warlock cavalry to break up the infantry :-D﻿
﻿
Posted by Ridmasta at 03:16 2 comments:

Ive been a very busy chap this last week since coming back from salute! That was an awesome day working for the boys at GCT playing Bushido all day haha. I tried to be good and not buy too much but had to cave when I saw the new Warzone Resurrection Imperial stuff on the Prodos stall... I now have about 1500pts of that to build and paint as a treat once the latest commission is done...

This is the 1st unit of a rather large Dark Elf commission i have been tasked with from a chap at the Harlow Games Club. There are just over 200 models in this project, and im really looking forward to getting my teeth into this over the next few weeks!﻿
Posted by Ridmasta at 01:59 No comments:

Cant believe ive had this guy for two months and not painted him! Bad Rid! 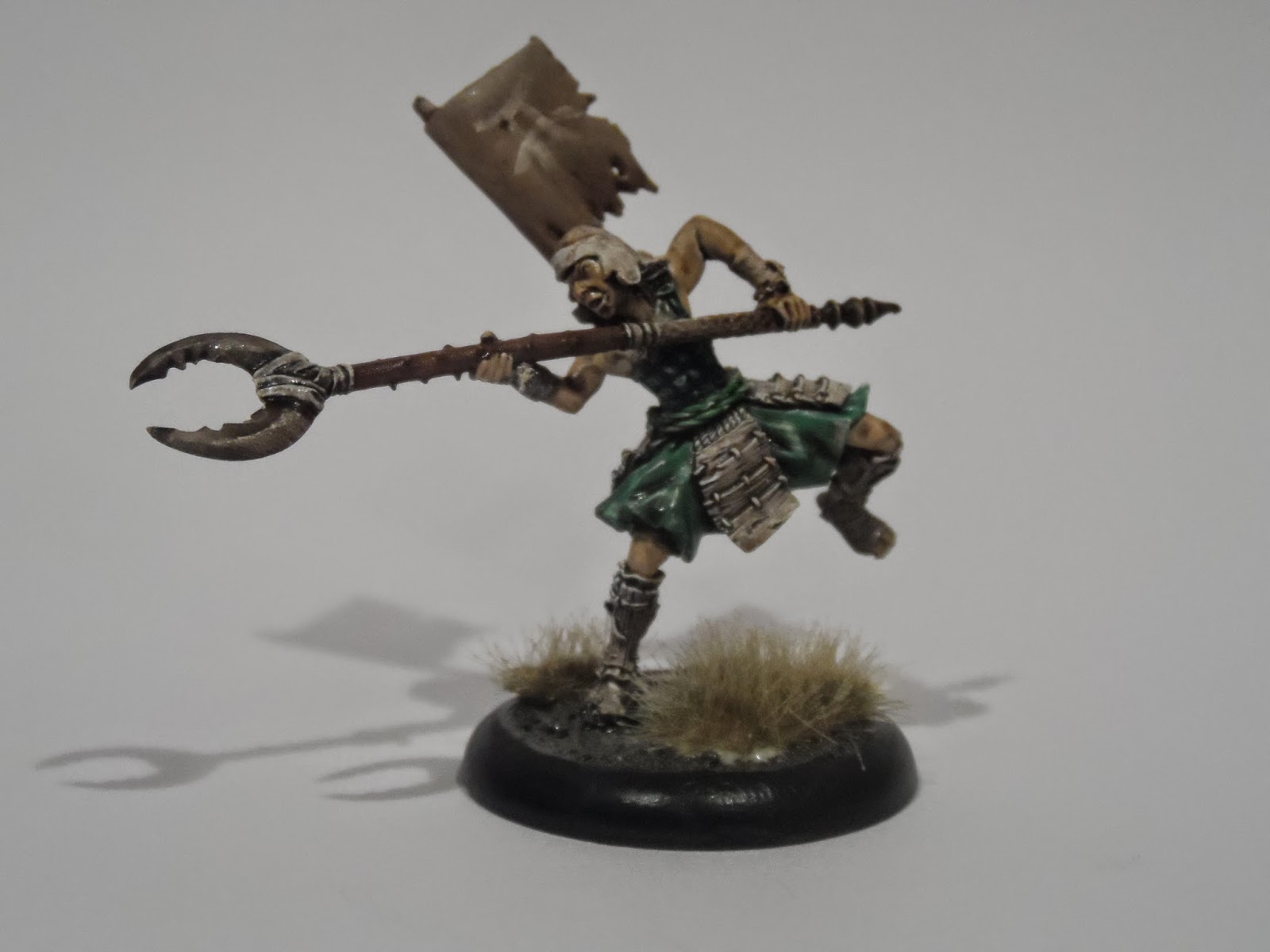 That's my Ito back up to date... till the big snake arrives hehe
Posted by Ridmasta at 13:04 No comments:

Had a good run of brush time these last two days and completed the woodies in good time:

Catchers (Old Jordel is a catcher in the team)

Its been a good year so far in brush life, I've undertaken three commissions already this year and have quite a few more booked in... so much so that I don't think I will get my own 160 odd models painted by the end of the year haha.

The count for the year is already at a staggering 384 models, far far more than this time last year, and of those only 60 have been my own minis. I have a wood elf blood bowl team on the paint table as I type, this should be ready to show in the next few days, and I pick up a massive dark elf army job later next week... that's another 200 right there!


Another quick recap in June Brush Brethren
Posted by Ridmasta at 05:38 No comments: