The four Trackers are done: 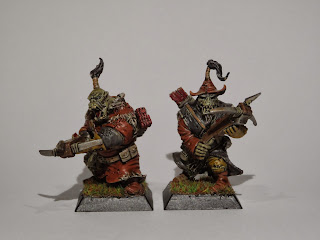 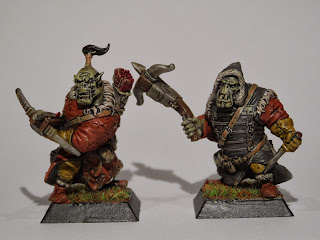 Six models down, ten to go! I have the Warriors of the Wind an Grakkha's tree spirit undercoated ready to start work on tomorrow.﻿
﻿
Posted by Ridmasta at 15:57 No comments:

Second mini completed for this commission, another Behemoth Troll: 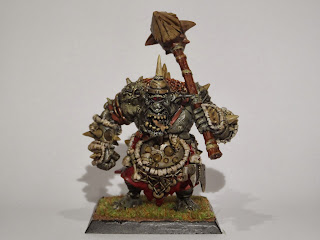 That's the last of the big lads for this project, its all orcs from now on haha﻿
﻿
Posted by Ridmasta at 11:27 No comments:

Just a quick one today, here is a RSN fleet that I was tasked with painting for a display on sunday, the two people involved are massive Firestorm nuts and will be presenting nearly 400 ships between them! 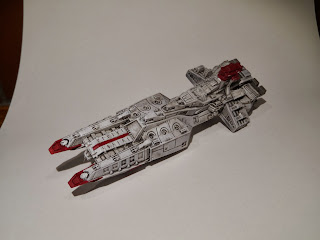 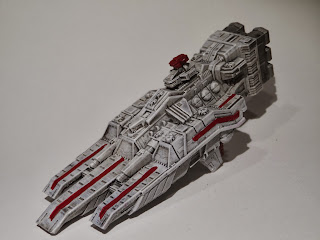 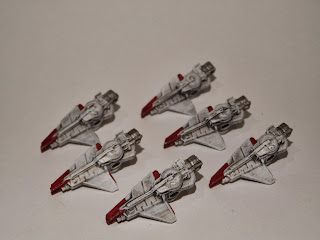 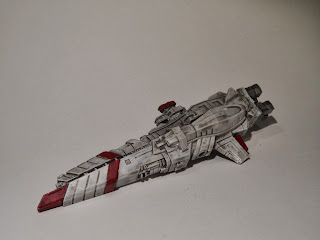 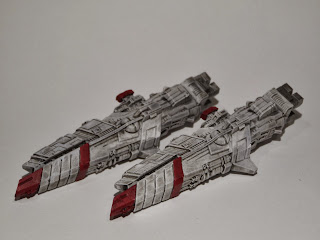 Second post of the day! I have been given a copy of "Lords of War: Elves vs lizardmen" by Black Box Games, by my good friend Tom at Cymbeline Games who is looking at stocking the range. 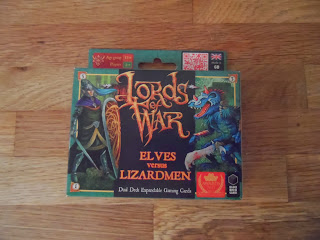 Lords of War is a card based system where armies of Dwarves, Orcs, Elves and Lizardmen battle on a map in a game of skill and strategy. They are currently running a kickstarter campaign to produce a third expansion with the Noble Templars pitched against the forces of the Undead:

I had some time this evening to sit down for a game with my stepson Jacob, he was very looking forward to playing as he loves card games like Munchkin and Smash Up!
First off we had a good look through the card packs and I explained to him what all the stats meant and how placement, combat and reinforcement works, and with this over and done with we were ready for a war: 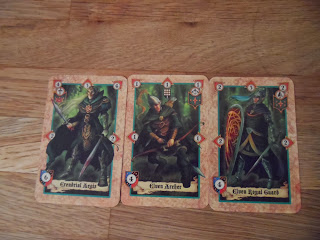 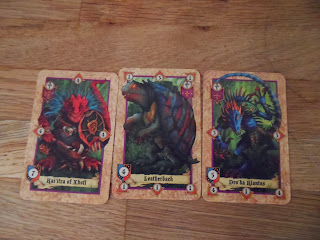 The two forces are quite evenly matched, the elves have greater missile fire and the lizzies have better close in hitting power. The rules were very straight forward to read and after a few minutes we were both experts haha. Combat is based on the attacks of units exceeding the defence value of the enemy, you can gang up your forces to defeat a powerful foe as long as the arrows (see above photo) point at the enemy unit. 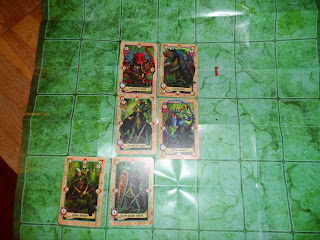 Combat is simultaneous so can quickly swing to favour one side with a well placed card! Our game was very close, and Jacob picked up the finer points of strategy and tactics very quickly, I ended up victorious 20 kills to 15 :-D
We both really like Lords of War and are looking forward to playing it again tomorrow... please back BBG's kickstarter, the link is at the top of the review... or order a copy from Cymbeline Games haha﻿
﻿
﻿
﻿
Posted by Ridmasta at 14:27 No comments:

I have been tasked with painting up a range of Behemoth Orcs for Confronation for Dragonfather at the Bunker, these are some pretty awesome mongel style orcs that were amongst the last of the metals produced by Rackham so there aren't masses of them in the range, and the commission is for a warband of 20 models. 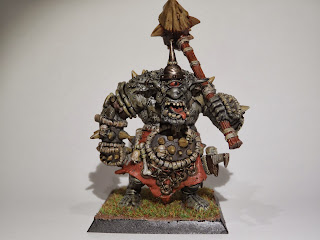 This is a Behemoth Troll, the first of the range I have completed, he's a pretty badass model and the 2nd troll is well on its way to being completed too.﻿
﻿
Posted by Ridmasta at 13:06 No comments:

A bolt out of the blue today, I have been asked to be an "Army Master" (Demo Monkey) for SphereWars

I got an email from Oscar, one of the founders of the company asking if I would like to be part of the UK team and help promote the system. SphereWars is a Spanish company, and the game is of the same name. It has been out in Spain for over 5yrs with hundreds of players at national events, local tourneys and painting competitions, and is beginning to make a presence over here.

It is a skirmish style fantasy based game, with a model count similar to godslayer and darklands; between 5-20 models depending on the game size!

Models are graded by class such as leader, wizards, elites, regulars, average troops and superiors such as this bad boy below:

This is the Leviathan, the superior for the Scions of Kurgan faction, it is currently the biggest model in the game, but a recent indiegogo campaign has funded the superiors for three other factions (One other alreay existed), and two of those are dreadknignt sized at least!


Like most skirmish games, starter boxes are available for each faction, this is the Newborns one:

Each of these boxes is about 200pts, enough for a small game and to get the basics but more options are opened up with bigger forces as you can include more characters and the elites. The superiors are only available in games of 1000pts+ which stops small games being too unbalanced.


There is a 2 player starter box that comes with the rulebook:

The current rulebook is an A5 softback, but a full hardback is on the way. It is also available for free download here: https://dl.dropboxusercontent.com/u/725 ... rs_low.pdf


The 5 current factions; the Scions of Kurgan, The Alliance, The Packs of Uresh, The Adepts of Malesur and The Newborn will soon be joined by a 6th force in the Cursed of Malakoy, and are all pretty varied in their abilities and look.

Scions of Kurgan: Children of the Ice God, big monsters with tenticles, hard hitting but few in number
The Alliance: Human medieval forces, displaced following a civil war
Packs of Uresh: Fire demons, lots of little beasties and a few big monsters
Adepts of Malesur: Shape changing creatures, lots of variety with specialised models
Newborn: human faction based on technology, pushed out the alliance from their home land.
Cursed of Malakoy: Undead based, use mind control to force others to fight for them.


This is one of the Adepts, the Moray Eel:

SW are sending me over 2 painted armies, rulebook, dice etc next week so as soon as they arrive I will bring them down the club to try out and put a game on, then on to other local clubs and stores!
In addition to the models provided by the company, I will be adding my own personal force so there will be plenty of spherewars updates coming in the near future :-D
Posted by Ridmasta at 12:14 2 comments:

Last bits of my wraith list done and dusted! 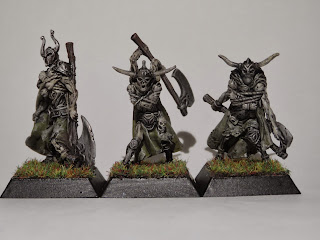 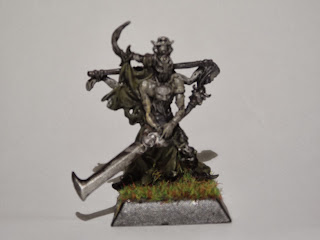 Its going a bit confrontation crazy at the moment, I have a commission starting for a large number of Behemoth Orcs, the mongel style mountain orcs that were some of the last metals that Rackham produced :-D﻿
﻿
Posted by Ridmasta at 11:36 No comments:

Email ThisBlogThis!Share to TwitterShare to FacebookShare to Pinterest
Labels: Drunes

More Lanyfhs, this takes me to 400pts of them so I can field a themed Witches Scourge yeah boi! 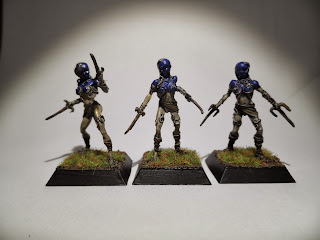 Email ThisBlogThis!Share to TwitterShare to FacebookShare to Pinterest
Labels: Drunes

Its been a while since I posted some toys, my daughters have taken it in turns being ill and my step son's birthday party at Bewilderwood was another day out of the trenches as it were hehe.

This is a small Firestorm Armada commission ive been working on for one of the guys at the club, its taken nearly 2 weeks but only four actual hours of painting time: 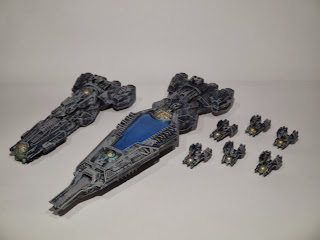 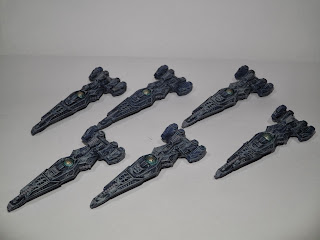 I personally don't play FA anymore, I sold my RSN fleet last year to pay for some more warmachine goodies, but some of these new fleets and the new starter set is really tempting me again!﻿
﻿
Posted by Ridmasta at 11:30 No comments: