Lord of the Rings: First Troll for Angmar

Finished this guy on monday but knowing i would get naff all painting done in the week i have scheduled some updates: 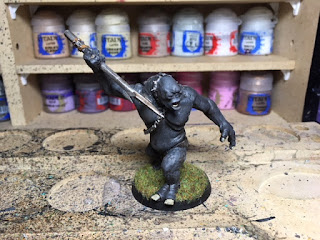 I will be adding another one of these too my force in time!
Posted by Ridmasta at 02:30 No comments:

To mix things up a bit yesterday i painted some of my large stack of Marvel minis: 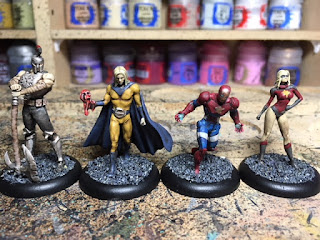 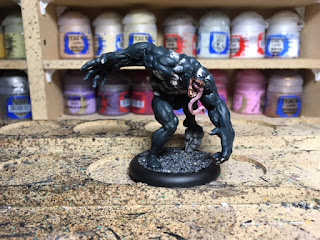 This five combined with the Dark Avengers Team Card will get me going with a 50pt force to play my mates again!

Lord of the Rings: Angmar Rises!

I'm slowly putting together the pieces for an Angmar army for LoTR. Angmar is the evil force that features a number of spirits either as leaders or making up the elite troops in an otherwise horde of Orc chaff haha: 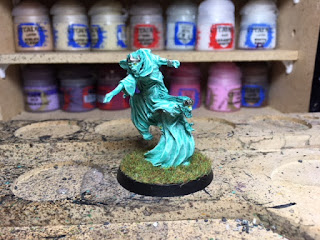 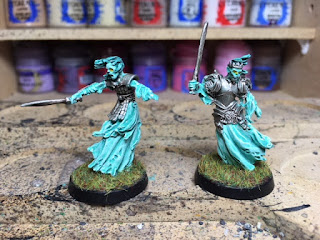 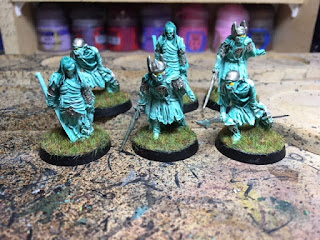 Now if only the useless muppets i have bought some Orcs and Trolls from ebay would actually post my items i could get started on the rest!

This has been my worst week for work in a very long time, and its not going to get better till near the end of February! I think it will be one post, maybe two, per week at best till then d'oh! 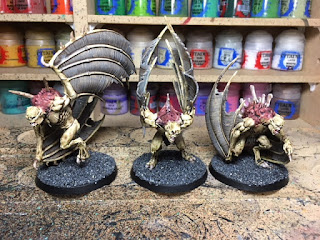 These three finish up my Crypt Flayers unit, but having seen the Daughters of Khaine previews and the fact that the leaked Death Warscolls show the Necromancer no longer working effectively with the Flesheaters i will be shelving this project and selling it on.
Posted by Ridmasta at 06:02 2 comments:

Yesterday i recieved these beauts, the first masters for the Mammoth Rider Chieftain & Shaman, and the Hill Giant: 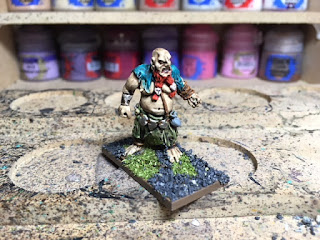 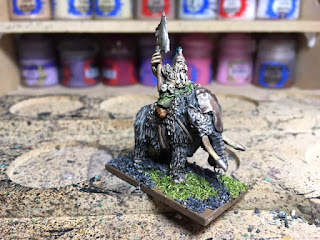 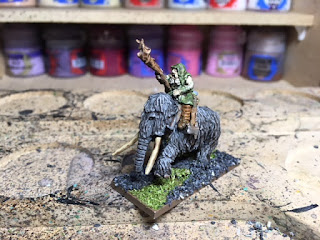 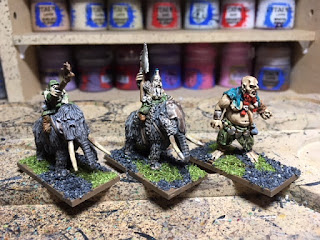 Fantastic minis and i cant wait to get my own production ones!

Posted by Ridmasta at 01:00 No comments:

And now for something completely different: 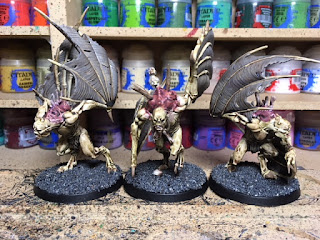 Greetings from the Warp, a 40k/30K/AoS tourney and events group whose events i play at, have started to run a Tale of Gamers with a two day event in late june or early july to fight it out with our new forces hehe.

I will be using the Flesheater Courts for this and above are half of my Crypt Flayer unit that forms the my January painting pledge!
Posted by Ridmasta at 05:58 2 comments:

These two units complete my Ogre Warriors and the army to this stage: 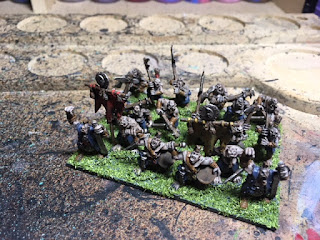 Wont be too much longer now for the rest of the force! another 240 models will be on route from Black Gate, 192 of them are Greenlinga about 6mm tall haha
Posted by Ridmasta at 07:17 No comments:

After a busy weekend of non hobby it was good to get the time to paint these up today: 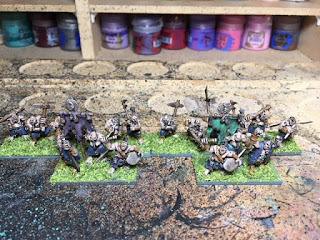 Two units of Ogre warriors, and with just two more units to go the end is in sight for this phase of the project!
Posted by Ridmasta at 12:24 No comments:

These finish off the Armoured Ogres for my growing force! 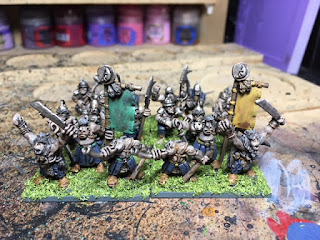 Now its on to the basic warriors to finish this stage of the army hehe
Posted by Ridmasta at 11:53 3 comments:

I was asked to paint up Anvil and Sledge for a new client, to be completed in a similar fashion as my previous commission in Decemeber: 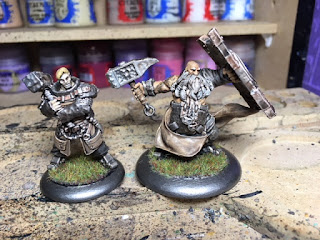 The skin on Anvil is slightly darker, and Sledge's hair is slightly lighter, but apart from that they are identical hehe.
Posted by Ridmasta at 02:16 No comments:

Lord of the Rings: Gundabad Troll!!!!

This bad boy arrived yesterday afternoon and i finished him after i got back from picking the horde up from school haha: 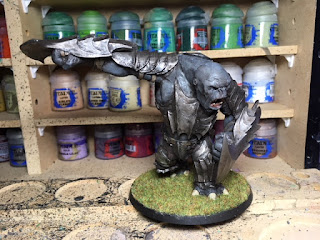 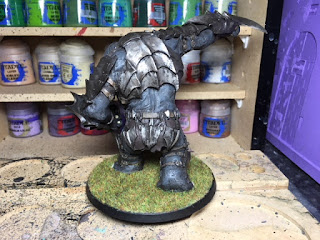 Such a nice model and is going to see a tonne of play with my Azog's Legion force over the coming weeks!
Posted by Ridmasta at 12:11 4 comments:

My first two regiments of the fantastic Armoured Ogre minis are now complete: 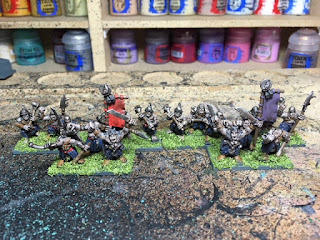 The undercoats on the next two are drying as i type hehe
Posted by Ridmasta at 04:14 No comments:

Lord of the Rings: The White Warg! 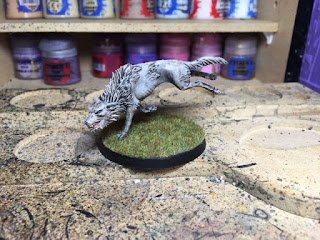 Also, i had a free shipping voucher from Forgeworld so i have one of those amazing Gundabad Trolls whisking its way towards me shortly!
Posted by Ridmasta at 10:00 No comments:

I've finished off my last two units of Cannoneers: 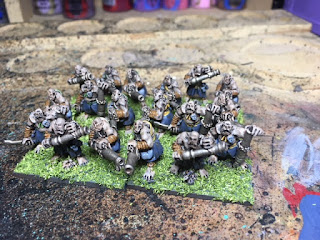 A brief interlude on this project now, and then its back with the Armoured Warriors!
Posted by Ridmasta at 08:18 No comments: 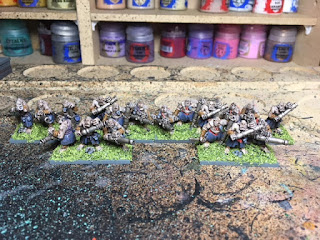 From the first campaign i picked up four units of each of the Cannoneers, Warriors and Armoured Warriors, for a total of 108 individual models. This is my first project of the year, to complete these in time for the second campaigns haul to arrive and finish the army,
Posted by Ridmasta at 11:47 2 comments:

Well happy new years everyone, we crashed out about 10pm but next doors fireworks got us up again to see the clock roll over haha.

In 2017 i painted a total of 802 models, down from 2016 but still a mighty haul, ranging from three warmaster armies to walking dead, guildball teams and a 40k space wolf army! I wonder what this year will have in store for me?

My three resolutions from last January were:

1) Mechanicum were fully painted at around 3000pts before i sold them on, i didnt get on with them in the game doh.
2) Sold my Tzeentch before i painted a thing haha, really didnt get on with the playstyle and Khorne were released shortly after!
3) I started strong, played 10/15 games by march but not much more since doh.


This year im going to try something different, rather than go for specific projects i plan to reduce my lead and plastic mountain by at least half! Ive gone through every unpainted model i own and i believe the pile to sit at 676 models! I know there will be new purchases and sell offs over the year but i want to reduce my December pile down to a much more manageable level.
Posted by Ridmasta at 05:25 2 comments: