Next up for this are the SHIELD Agents as line men: 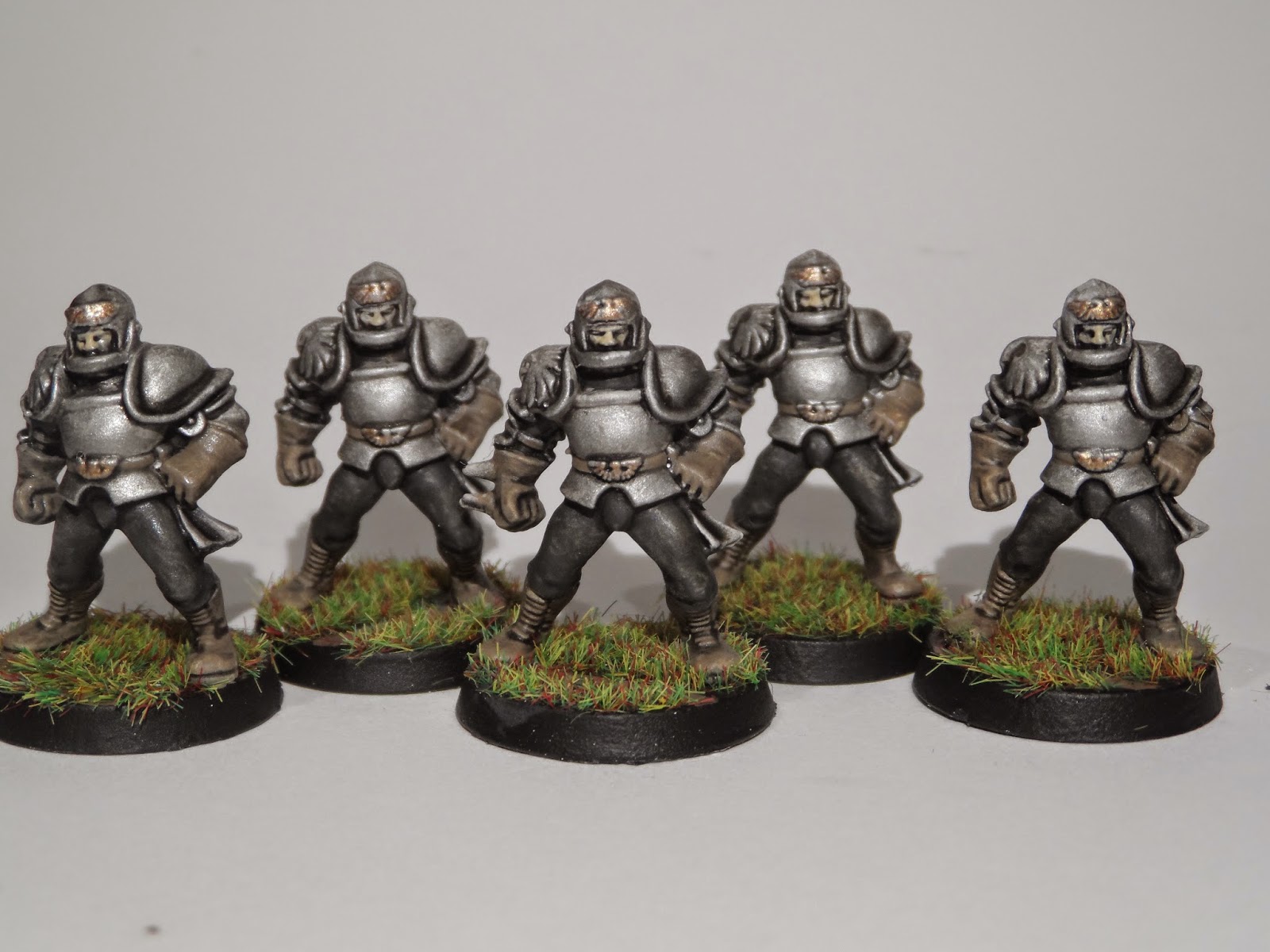 I tried to get them to look like the black suited agents a la Phil Coulson, but alas my skills with black weren't up to it so I settled on something similar to the training get up the wear in Agents of Shield and Winter Warrior.

First up in a bloodbowl commission I have received is Hulk the Ogre Blocker: 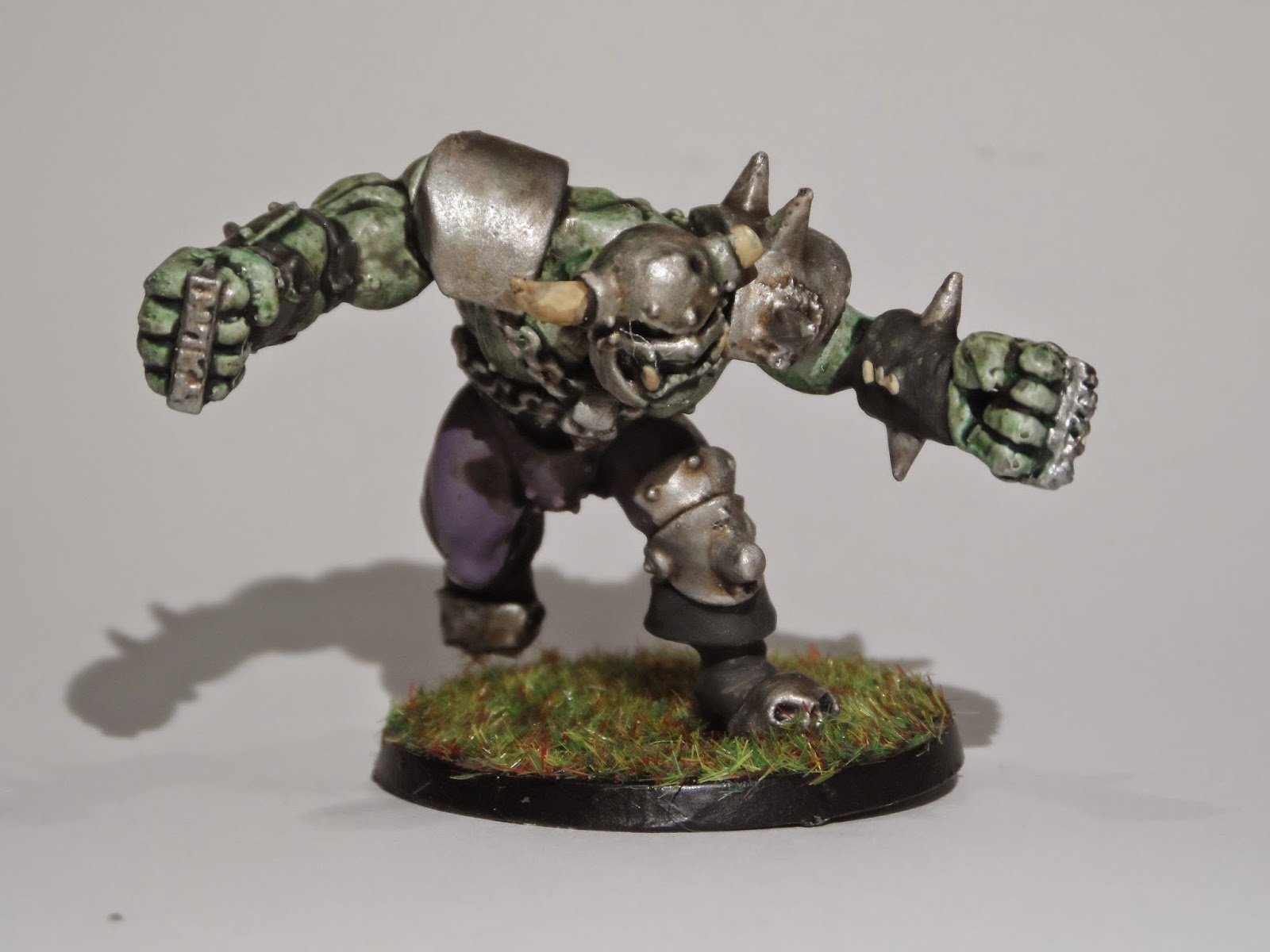 The job is for a Human team based on the main Avengers characters so Hulk, Iron Man, Captain America and Thor will be appearing along side a host of SHIELD Agents haha

Since I have decided to try and improve my warmachine ability and try to get to some more tournaments with the rest of the Bunker guys. One of the things I see plenty of is people transporting their armies on trays for speed of deployment and ease of moving between tables (Down in my case haha!).


Some guys on a warmachine facebook group recommended Westwood Wood Works as a great place for a low cost and versatile board.

As you can see it caters well for the discerning tourney player, plenty of space for those double stormwalls or in my case, double meat threshers for my pigz.
All of the 40mm spaces at the back have extra depth for more 30mm troops so the cryx players wont be missing out either.... bad cryxs with your bane spam :-D

Here is my Searforge army displayed on the board, that's 58pts of troops so you can see how much room is left for stuff from other lists. An Earthbreaker, another unit of forge guard, another TAC and two more casters would still leave space to grow my force.
Its not just warmachine that a board like this will work for, I have it in mind for transporting my Darklands minis at future tourneys:

Darklands has a larger range of base sizes than most games, my 60mm troops would have to just sit on the board but the 30, 40, 50 and 100mm models fit a treat.


My board was very reasonably priced at 20 pounds + postage, and was delivered promptly and arrived safely. They also make a really nice skirmish tray with storage built in, perfect for malifaux/bushido/infinity/infamy etc


If your looking for a tourney tray I heartily recommend Westwood Wood Works!

Email ThisBlogThis!Share to TwitterShare to FacebookShare to Pinterest
Labels: Spotlight

The dust has settled, sleep is caught up and the toys are safely packed away... also, the missus has gone out and im working evenings so I have a fair bit of time to get this all down haha. 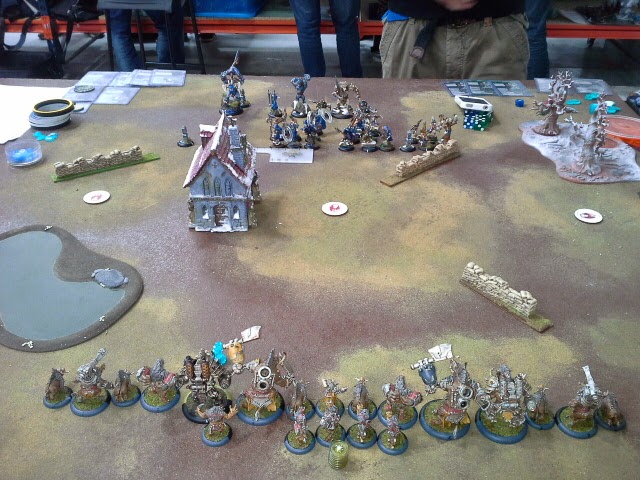 Last years winner, Team England player and one of the top players in the country hahaha, not fancying my chances in this one! I went with Arkadius as I figured those free boosted frenzies and access to both primal and forced evo would help hit the high def circle minis. Bret rocked a cracking pmorv list with tough zombie druids, blood trackers and a selection of beasties. 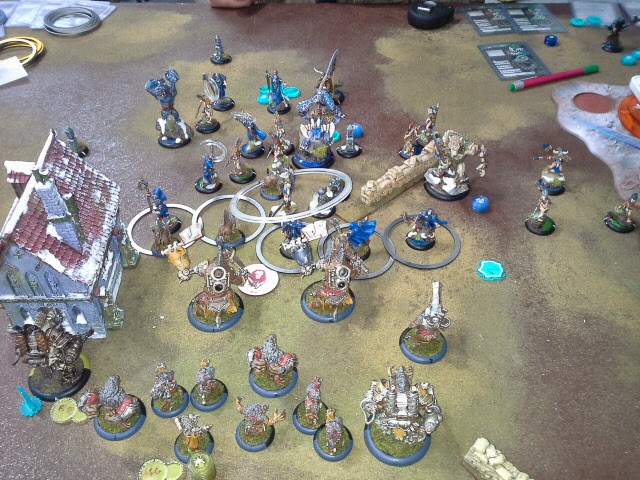 Circle jam the lines with the clouds, I can kill a few druids but not enough to break through quickly. 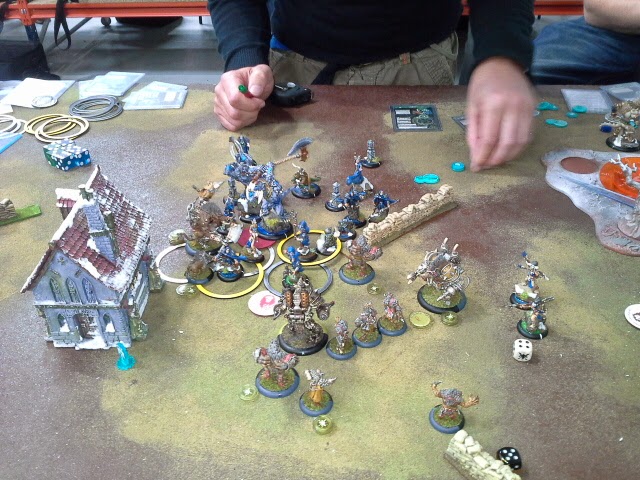 Near the end now, after some epic dice the circle get the advantage as my beasts wittle away. I have a last go at assassination but it fails with counter magic, ghetorix is about 9 from Dr A so I concede.

A top game and a great learning experience against a true master, Brett was a great opponent and I look forward to playing him again in the future. 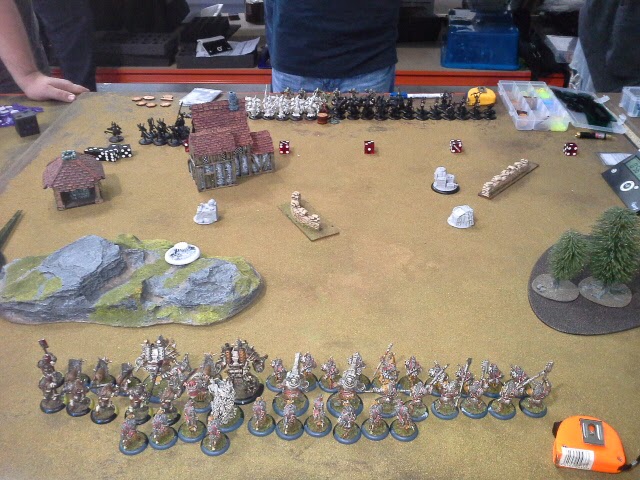 Dave is a mate from the Bunker, ive only played him a couple of times though and he really knows his stuff (Dave has also just been nominated for the WTC so congrats mate!). I went with Midas, figuring cryx would advance quick and kill my stuff... just what midas wants with a ranged heavy battle group to swarm in range of his reasonably fragile casters. Dave went with pSkarre, loads of dudez and a couple of jacks. ﻿ 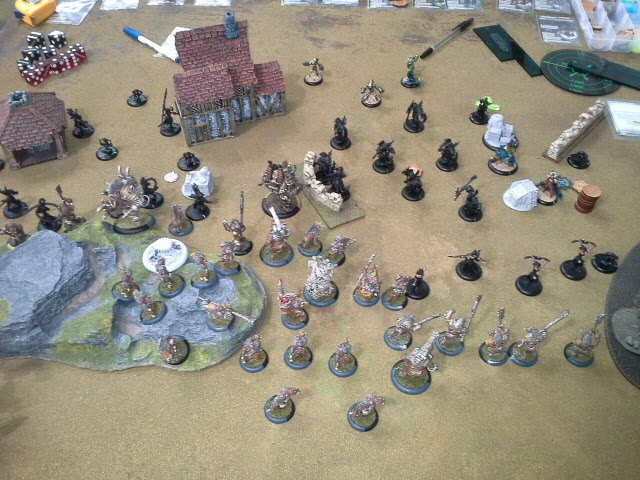 Our lines close, I had my slaughter housers to murder his satyris, brigands poping bane knights all over the shop... Dave held back and went for the scenario win, camping like a boss as I was jammed in! At one point he had 6 knights charge or engage a road hog and did about 10 damage to it, he only killed 2 rabos so my plan went out the window and I struggled  to grind through quick enough.
One point of hilarity was Midas cursing the bane knights.... in your face﻿ Cryx hahaha! 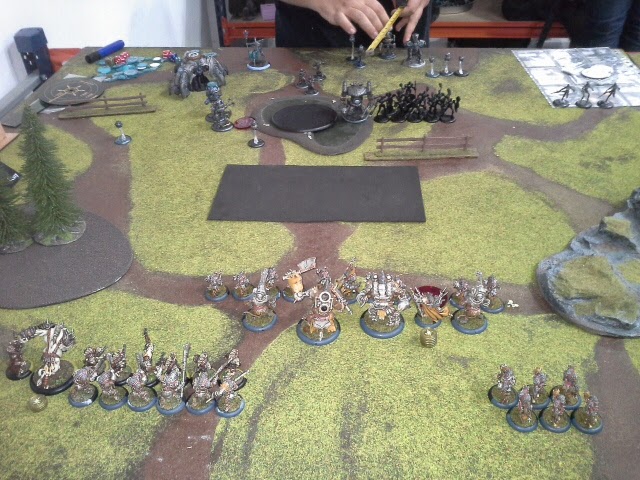 Xavier was rocking the cogs and admitted he was struggling to get to grips with them having not long picked them up... I had run them for a 6 months myself and regularly play against Sherwins robots so had a good idea what to expect. Xavier went for Lucant to armour up and I went with Carver for the extra damage and armour.
I only took the one pick in this as I was knackered and forgot, but it came right down to the wire with Xavier clocking whilst I had about 15 left on it. high lights for me we brigands with quagmire being pains and jamming his lines, and one super star charging the prime axiom on lucants feat turn at dice-14 and laying a point on him hahahaha.
He managed to get a tow cable on carver who transferred the damaged and then ran away in my turn to escape for the win.
﻿
Game 4 vs Kelvin Jones (Cygnar) 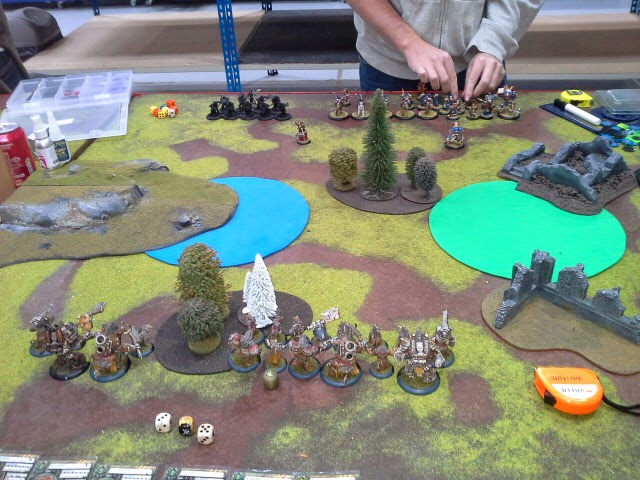 Kelvin is a top bloke who I played last year with cogs getting a cheeky aurora assassination on ehaley. This time he went with eCaine and me with Dr A, I figured hyper aggressive would help against shooting and Dr A could camp transfers and sit with the gorax.
﻿ 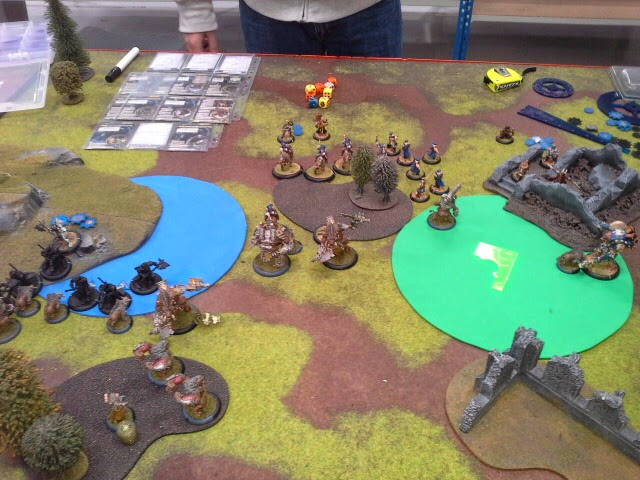 His list had the ubiquitous boomies with arcane shield on one flank which toughed like magic all game, Kelvin even swapped his dice over after about 10 consecutive passes but they stilled kept on haha. I struggled to break out away from the tempest blazers and caines feat cleared the warhog and road hog who was about 2mm short on his spray to get caine.﻿ 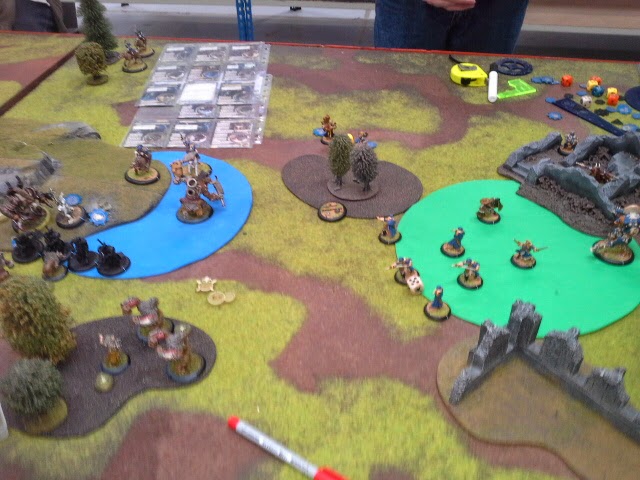 Kelvin cleared me out of his zone again to dominate for the win, another top game that I look forward to a rematch for!﻿ 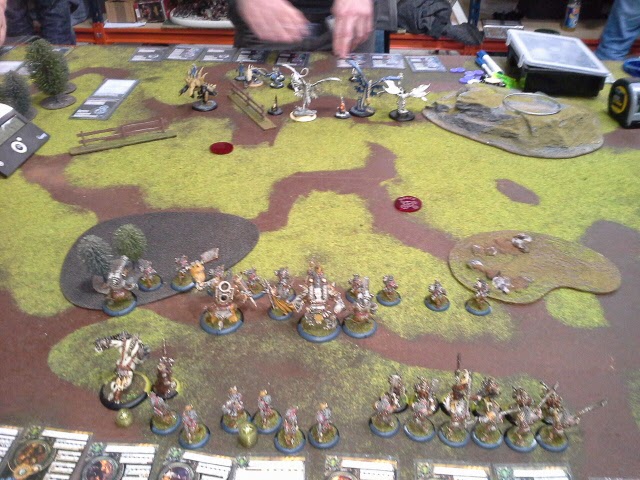 Last game of the event and I get to fight legion for some flags, Rob goes with pAbby T4 and me with Carver again. Rob and his mates had missioned up from Southampton and I was worn out from 4hrs disturbed kip (that's to gwennie getting up throughout the night!!) so were both glad this was the final match up. ﻿ 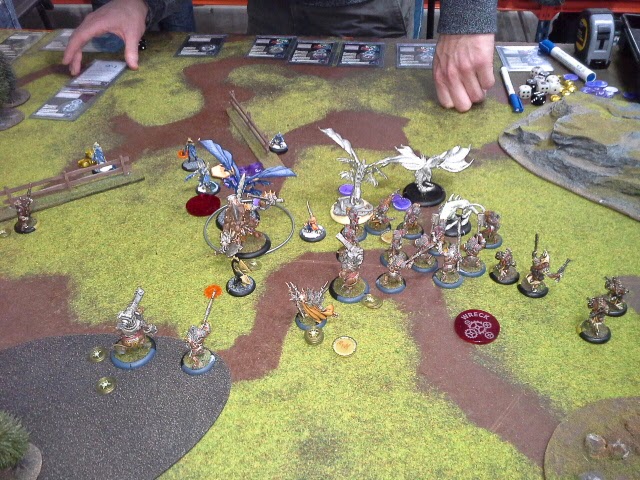 Quite late on, I had feated , Brine had smashed a raek and a carnivean to paste but whiffed his last one on abby... sad times for Brine who died next turn and again wiffed his kill strike. That metal ring around the angel closed to the flag really did me in, it was a blight storm that properly stopped me in my tracks... the hogs couldn't hit def 15+ legion with no boosts! 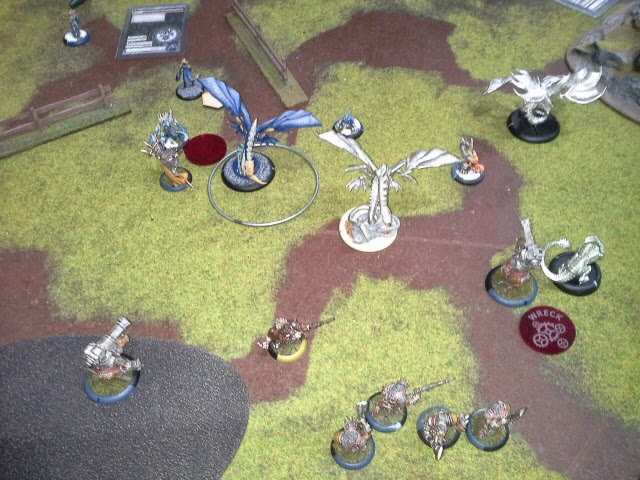 I was going to lose on scenario and time so I figured sod it, and carver went for the assassination... didn't go well and abby got the crit for no transfers of tough and a couple of hits later it was bacon sarnies all round.
Well 1 win by clocking and 5 defeats is not a great performance but I had a lot of fun and hopefully gave all my opponents a decent game too! My thanks to Pressganger Kev for running a cracking event and to wayland games for hosting, cheers chaps.
Sadly I managed to delete the pic of me celebrating my best in faction result so I cant post that up :-(
Next year Sherwin is planning to take his minions so I will have some competition... looks like I may need some gators of my own next time ;-D﻿
﻿
Posted by Ridmasta at 01:59 No comments:

Conspiracy of the Cult: Taisho Tenbatsu

This bad boy has been sat unfinished for a good few weeks whilst I finished my Ysians and pigz but now he's done: 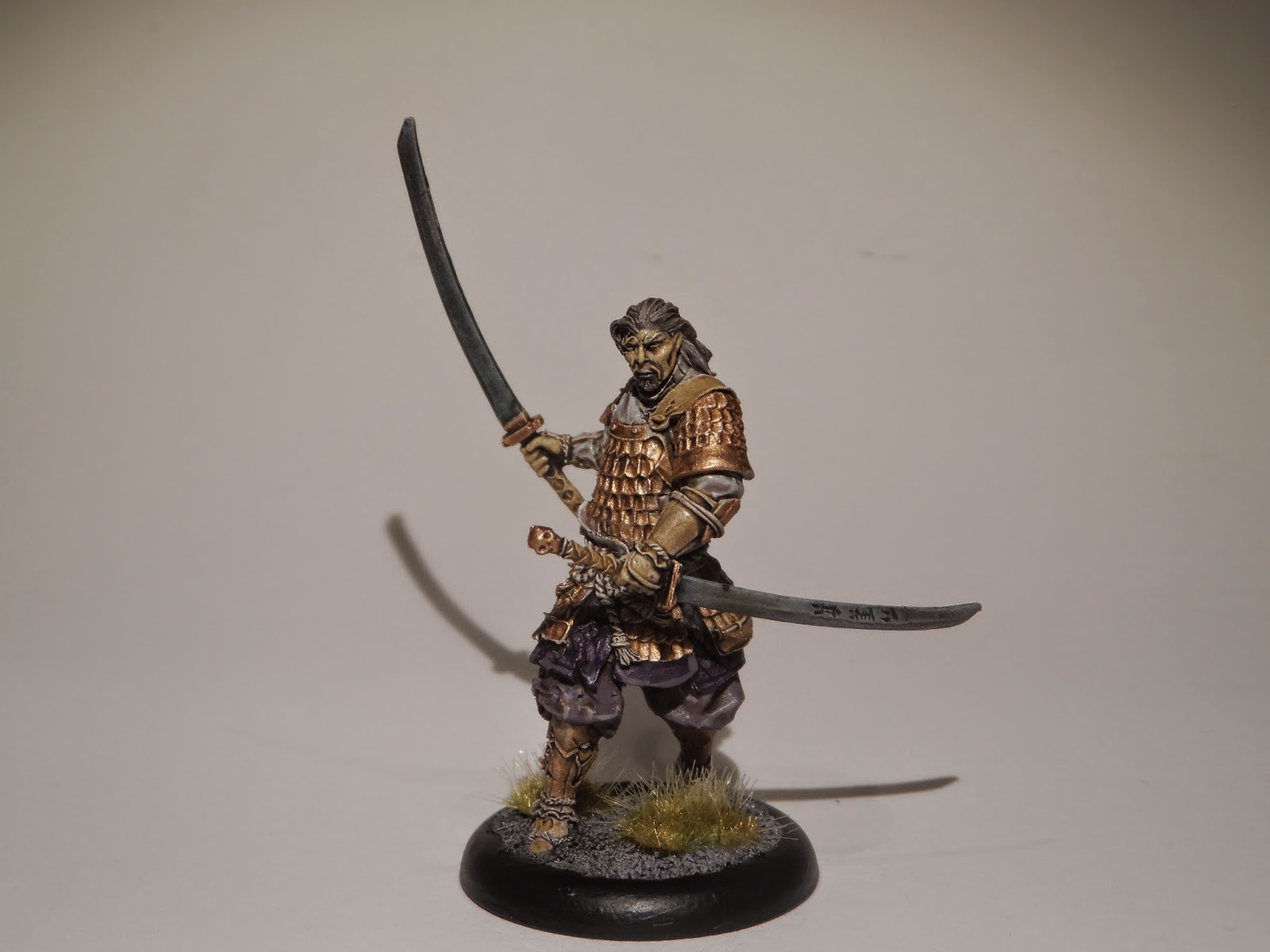 Email ThisBlogThis!Share to TwitterShare to FacebookShare to Pinterest
Labels: Bushido, Cult of Yurei

This is the last of my piggies till November when Helga and Maximus are released as part of the Exigence line up: 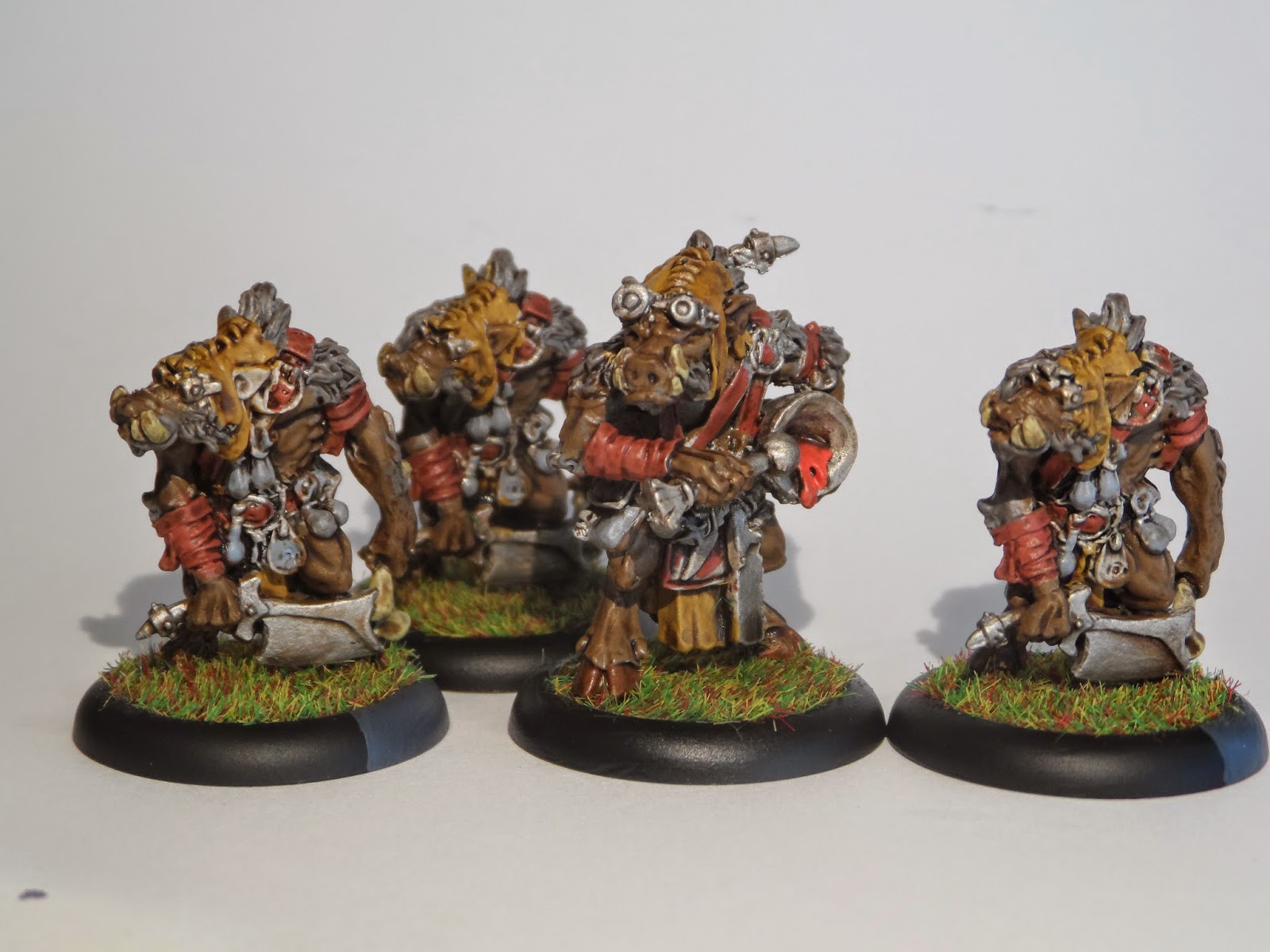 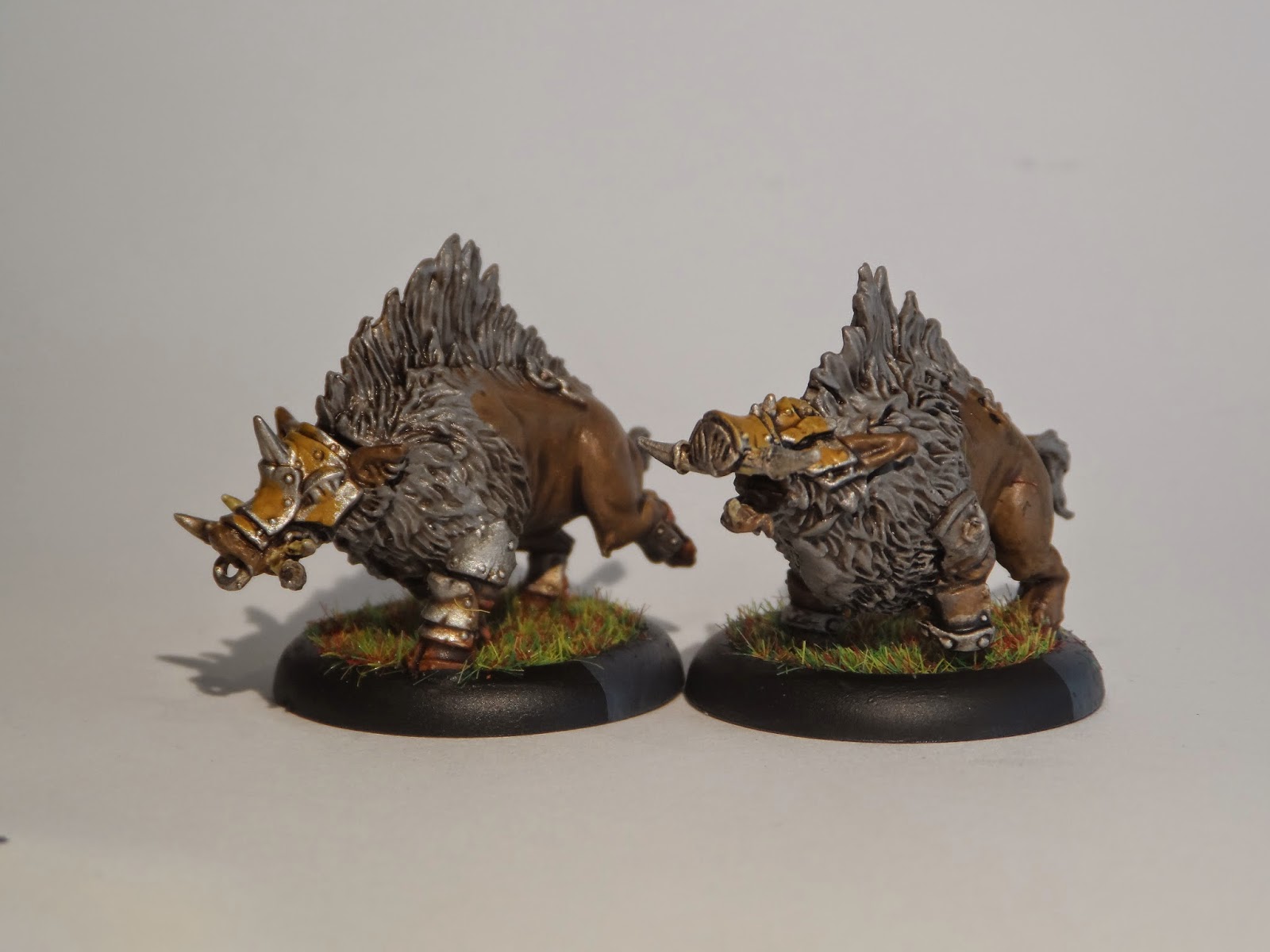 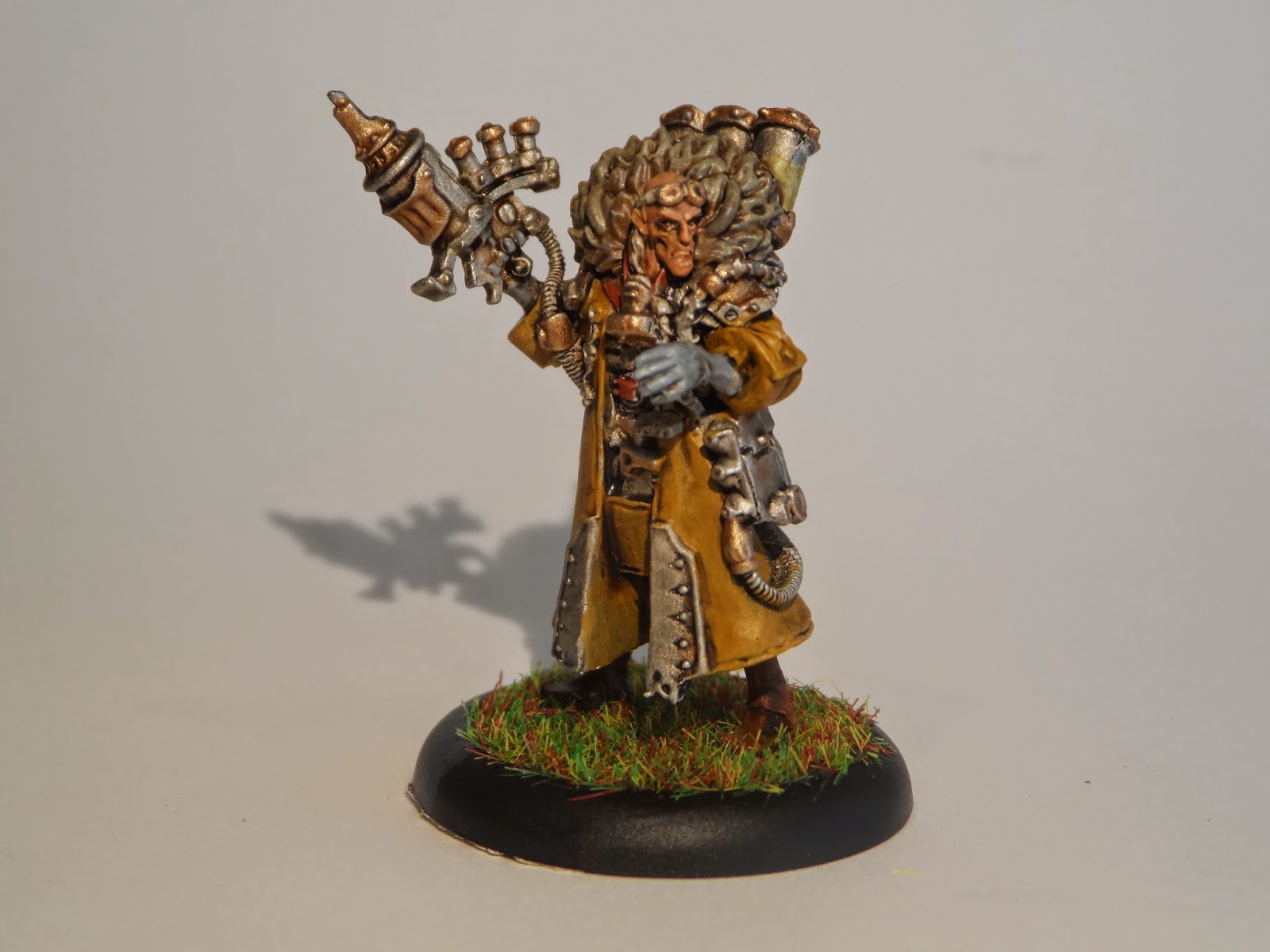 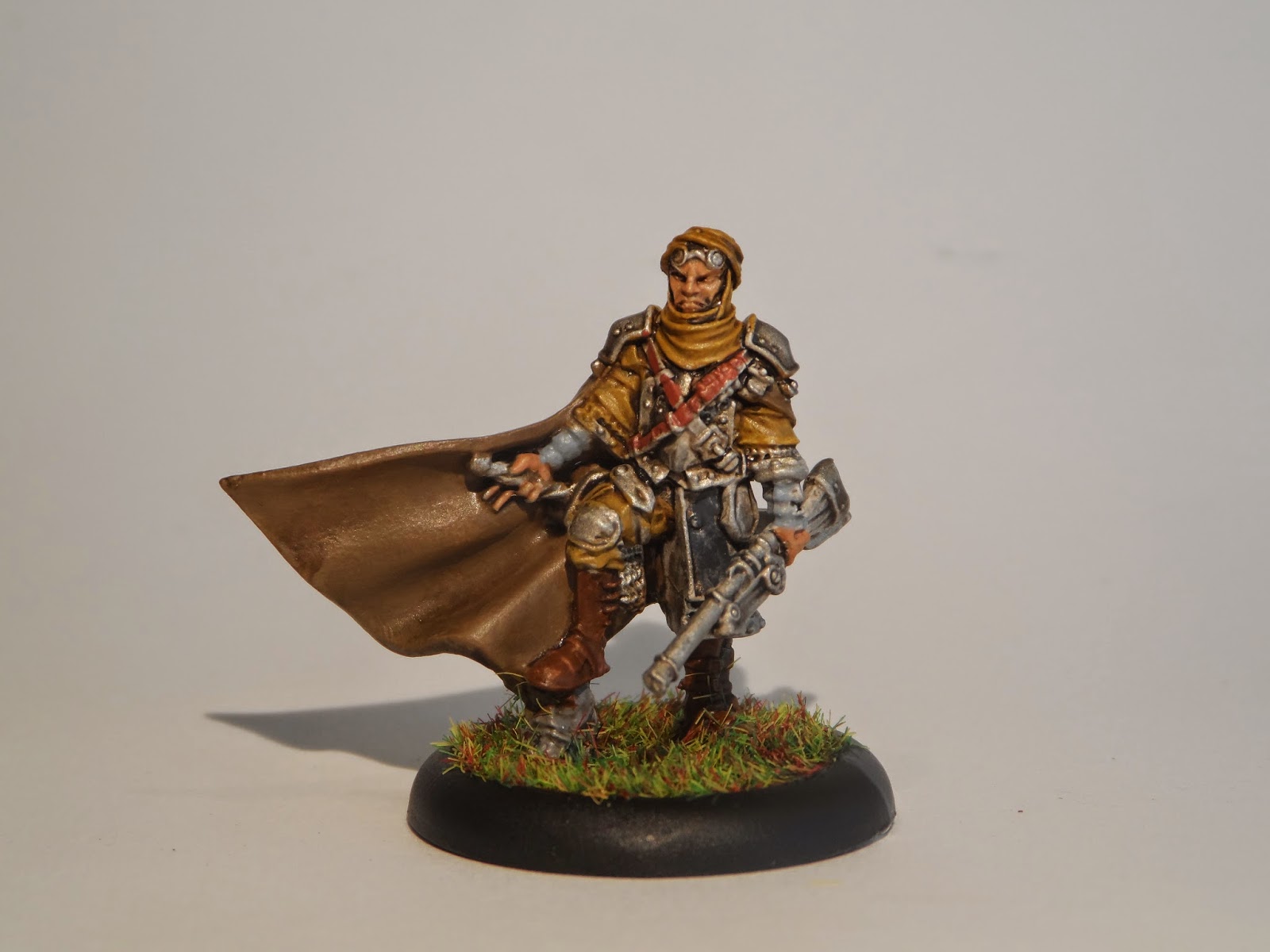 ﻿
﻿
Speaking of Exigence, its going to be a good set of releases for the pigs:
Warlock - Helga the Conquerer
Battle Engine - Meat Thresher
Solo - Maximus
Solo - Efaaret Scout
Helga looks to be another good warlock, an infantry buffing pseudo-control caster which should mix things up nicely. The Meat Thresher AKA Pig Tank is a giant steam rollering cannon totting death machine that murders infantry. Maximus is a Farrow who killed a load of Khador Doomreavers and nicked one of their fell blades and is now a Doom Pig haha.
The Efaaret Scout was the big surprise though, only spoiled on Friday morning.... a 3pt light cavalry solo with a POW7 AP Sniper gun!!! Its am FA2 model to boot so i'm looking forward to the mayhem they will cause plinking things for the Slaughterhousers to go to town on.
2015 is definitely the year of the pig!
Posted by Ridmasta at 03:37 No comments:

Busy busy end of the last week, doesn't leave much time to get the last few bits done before the Masters next weekend. Today has been useful though, and I have this little lot completed so far: 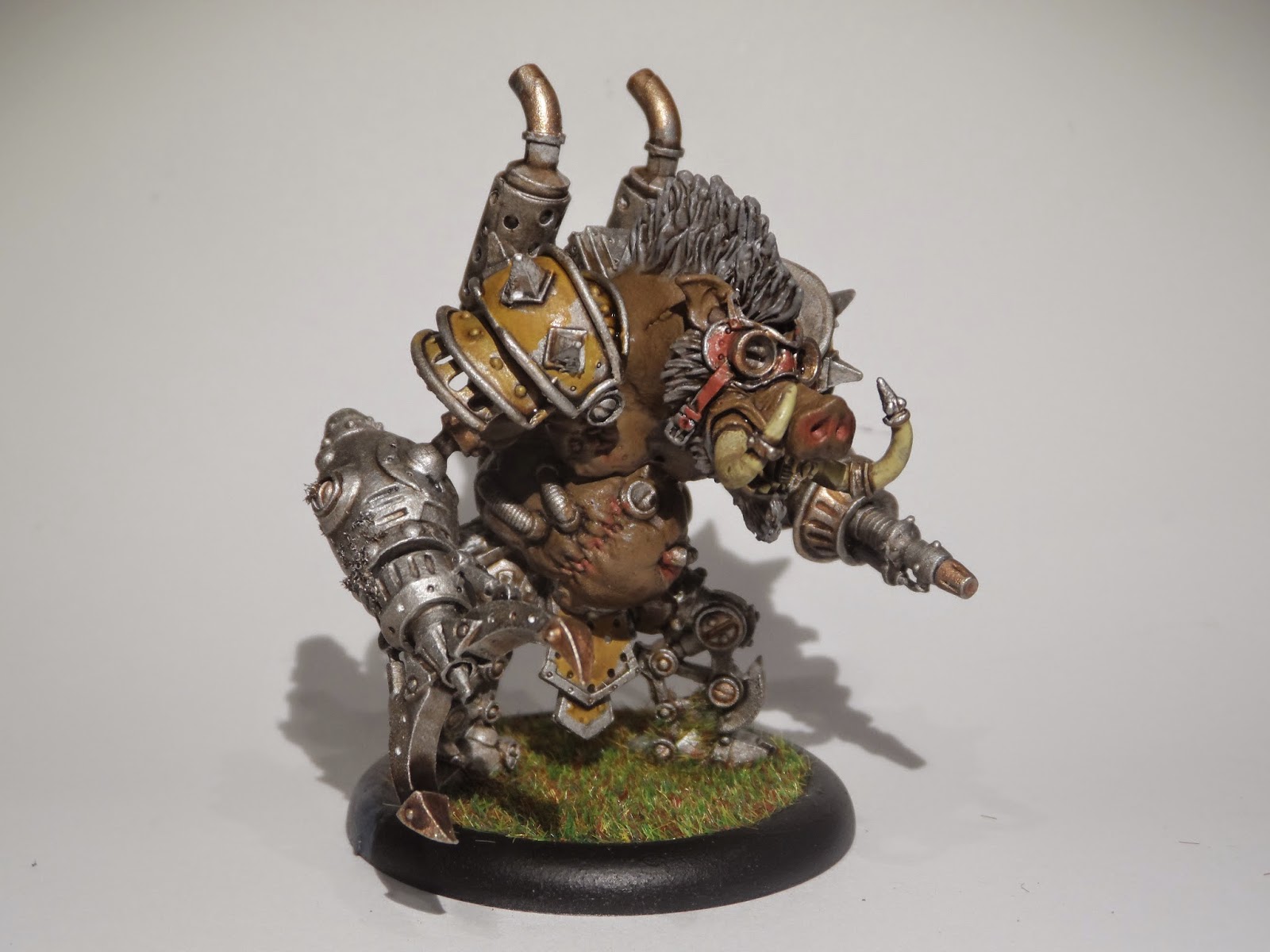 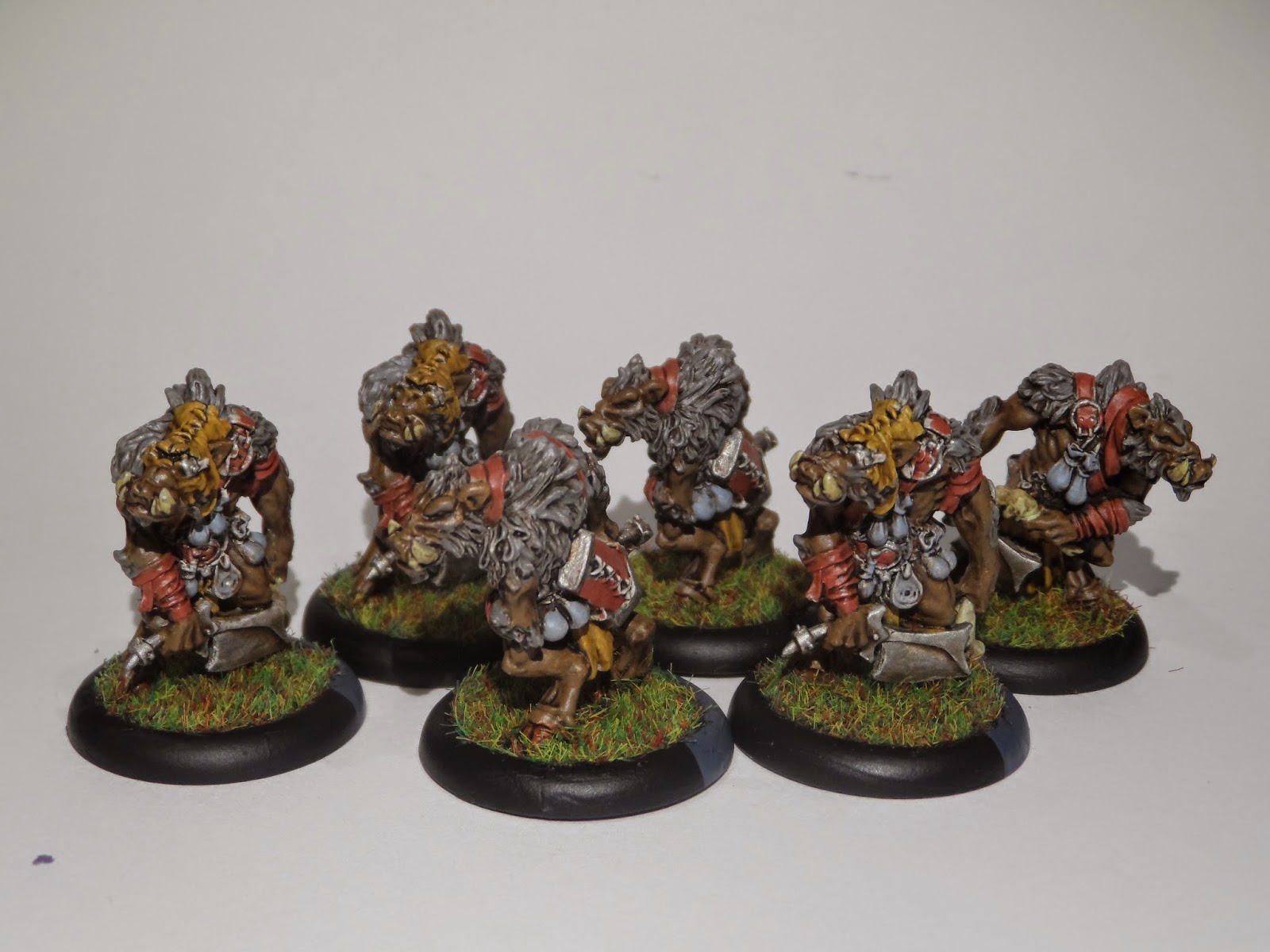 More to follow soon, just eight more piggies to go by next Saturday haha!﻿
Posted by Ridmasta at 07:57 No comments: