Getting this in proper early as we are busy today and then have friends over this evening, Happy New Years peeps!


Last year i planned to simply reduce my lead mountain! I started the year on 383 and end the year on 359 haha, despite painting up and selling over 600... its a small decrease i suppose!

Edit - I actually went through more boxes and found this total was 735 eek!!!! Time to sell!!!

As with 2018, 2019 was massively busy for me with work, i painted 576 models in the last twelve months, a decent haul by any stretch but far lower than even last years total of 764. I can hope that this year is better but i doubt it, the nature of the beast of my industry is that we are all working longer days with odder shifts that massively impact my spare time to paint.

Its also time to consolidate down the number of armies i have for game systems... i have five for AoS and as much as i enjoy it i just dont play it enough to justify that. LotR again i have five armies, that total needs to drop down to two; a Good and an Evil force is all i need. A few other games that i have odd bits for but dont play also need to go!

I plan on sticking to a few key games and playing them each at least once a month:


Then having some flavour games to bust out as needed: 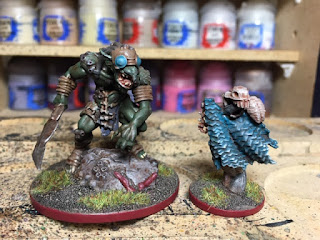 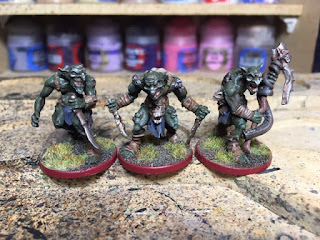 A Song of Ice and Fire: Neutral Heroes 2

My box of new Heroes arrived on Saturday and i got cracking last night hehe: 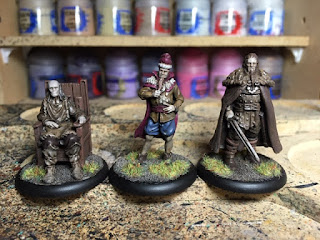 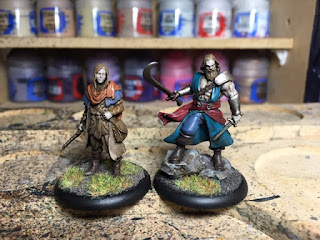 Its only taken eight months but i finally have some more options for my army! And it looks like there are plenty more to coming with other Stormcrow, Bloody Mummer and Rose Knights out at some point yeah.
Posted by Ridmasta at 08:38 2 comments:

Email ThisBlogThis!Share to TwitterShare to FacebookShare to Pinterest
Labels: A Song of Ice and Fire

A Song of Ice and Fire: Stormcrow Archers

Second, finally some new releases that i can use for my House Bolton / Neutral army haha: 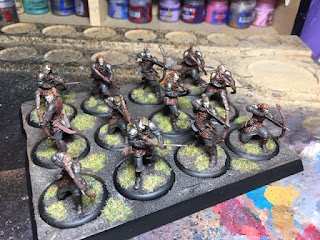 They aren't the best missile troops in the game by any stretch but they can provide a cheap home for decent unit attachments and by claiming the tactics zone you can get them to fire twice in a round, other units cant do these boom!

I spent my xmas money on these, the second neutral heroes box and a box of the Blackguards as i have arranged a game with a mate for the end of January.
Posted by Ridmasta at 11:58 20 comments:

Email ThisBlogThis!Share to TwitterShare to FacebookShare to Pinterest
Labels: A Song of Ice and Fire

Finishing off the Shapers from this first wave of Godtear: 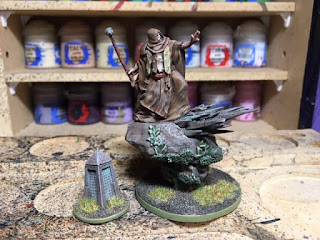 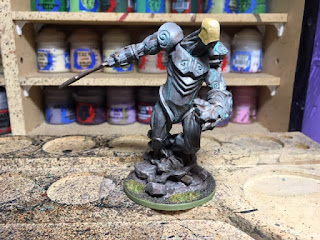 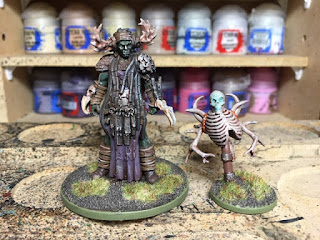 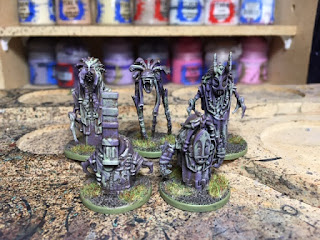 Shayle is all about movement control from enemies and moving Landslide about to deliver some brutal attacks. Rattlebone manipulates the boons and blights across the board, changing them to your favour.

Been a bit of a slow week haha, got this Dragon Man finished today: 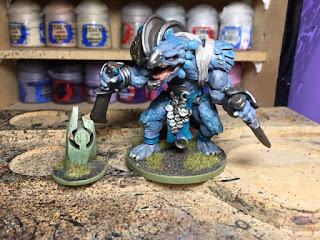 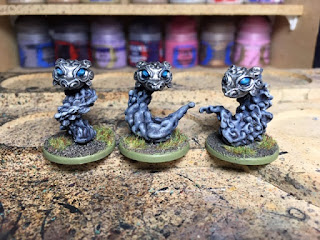 Everyone's favourite giant dwarf is ready to take to the field hehe: 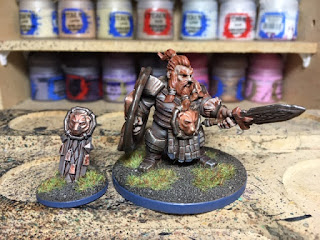 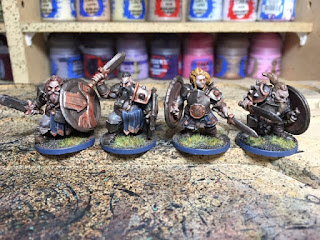 These are some of the tankiest models in the game, with both Champion and Followers able to reach Armour 5! These chaps wont die quickly! The downside to this much resilience is a distinct lack of speed, with only the Wretchlings being slower than them so placement and support is key to getting the most out of those little legs.

Busy week meant no painting for me but i have snatched a couple of hours today to complete these: 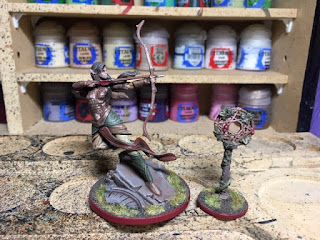 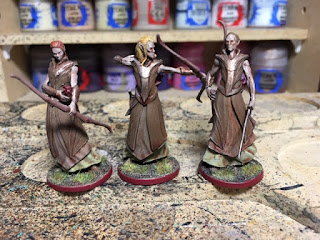 The true ranged Slayer in the game, she packs a multitude of different shots to give her an option into a wide variety of models.

The Rangers also aid by applying debuffs and can help finish off a wounded champion with their decent bow fire.

Godtear: Nia and Half Tusk

Two more Champions & Followers today, Nia and Half Tusk are ready for some table time: 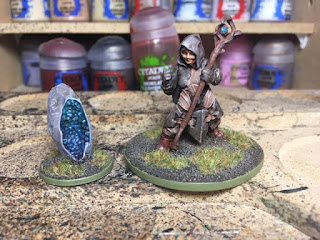 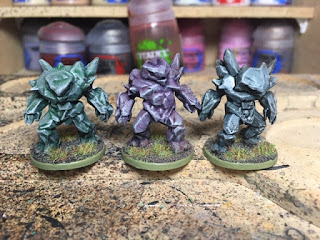 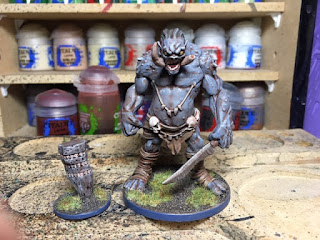 Froglodytes - Followers of Half Tusk 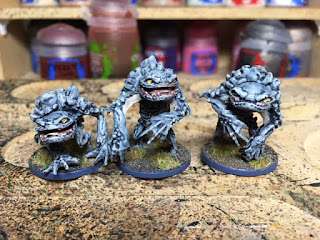 These give me one of each class painted up now, Nia is a Gnome Geomancer who can manipulate objective hexes and hand out a few boons and blights where needed.

Half Tusk is a mighty Troll who with his frogs can guard and move banners about to keep them ptotected. He is also pretty handy in a fight, with two attack actions for the price of one and currently the only in game source of healing hehe.

My pledge for Godtear finally arrived and the club is all hyped for getting some games in so these have gone straight to the top of the queue hehe. 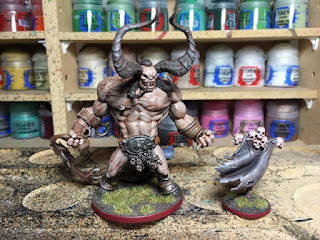 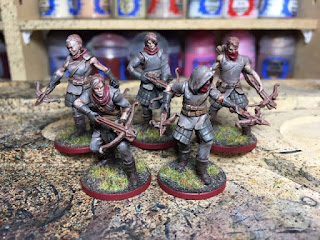 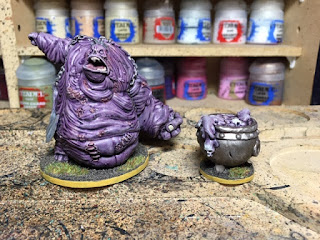 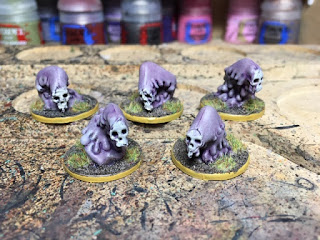 The models in this game are divided into four classes: Slayers(Red), Maelstrom (Yellow), Shapers (Green) and Guardians (Blue). Each gains certain bonuses to scoring such as killing champs or followers or planting banners etc, but the best thing about it is how different each Champion n Followers set are from each other within the class itself.

My planned starting warband of three Champions n Followers is Rangosh, Grimgut and Nia who is currently on the paint table... The plan is to support Rangosh in killing enemy Champions by buffing his high damage but low accuracy attacks!

I have painted the base rings to match the class for ease of identification of the class types.

Lord of the Rings: Uruk Hai with Bows

Another warband of Uruk Hai for my Cirith Ungol force: 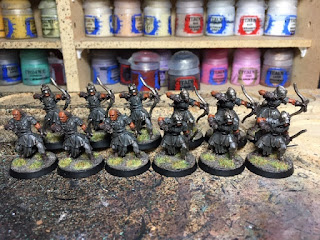 Not commonly seen on the boards outside of an Isengard scout force hehe, but they still have Str 4 and a good Shoot value of 4+ so might as well use it!
Posted by Ridmasta at 06:37 3 comments: