About 6 months ago i came across a range of amazing figures from a company called Infamy Miniatures, a cracking little company run by a nice guy called James. I made a point of ordering some toys to pick up at salute, and had a good chat with him about his range and his plans for a board game / dungeon crawler set in a dystopian victorian era london... complete with evil sherlock homes!

I picked up Frank Hyde and Tallulah Belle first, but i intend to complete the range over the coming year as i like the whole lot haha.


First up is Frank: 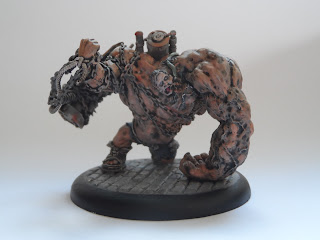 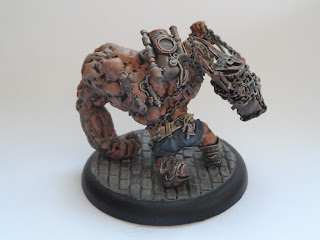 This is the most detailed model i have ever painted! Luckily most of him is flesh so i was able to blue wash a lot of it to get some colour onto all those bulging veins hehe. Then it was cadian flesh tone, earth shade wash then highlight of flesh tone and pallid wych flesh.
I wanted to try out some nmm on the chain weapon so started with some grey lowlights and some whiter highlighting before dulling it down with some earthshade. I added some rust effect with some lugganath orange edge paint drybrushed on, and then flicked some more earthshade over it.
I bought a load of cobblestone bases from Tiny Worlds on ebay and have enough to cover quite a few releases so im looking forward to more stuff coming out, and will be backing and promoting the upcoming kickstarter on this site.﻿
﻿
Posted by Ridmasta at 10:00