Second coup of the week boys and girls, I have been able to arrange an interview with James Griffiths, owner of one of my favourite producer of fine quality toys, Infamy Miniatures:


Infamy has come a long way in the last couple of years, you must be proud of your progress so far?

Yeah, I am, though I have to have folks like you, my family, my girlfriend, etc actually say things like that in order to make me step back and see it for what it is! I'm really deep in it at the moment, with a KS just a few months away, so perspective is rather lost. But, the truth is, this time two years ago I only had one model out. I now have a fair few minis released and a load more ready to go.

More than that, there are tons of people who think a lot about those models and some have done beautiful paint jobs on them.Also, there's a growing wave of positive feedback on the art and the
background. It's really encouraging and seeing the same folks who have been there for the entire time liking things on Facebook and posting comments really does keep my spirits up when times get tough.


Was a game for your range always part of the plan or is it a recent idea?

Oh for sure, there was always going to be a game. The nucleus of the idea for Infamy was to make a cool Malifaux crew based on my thoughts after reading the Neil Gaiman short story A Study in Emerald. That changed very soon though and once the world started to grow in my mind I knew there would be a game.


You've kept your plans quite close to the chest so far, are you able to reveal if its going to be a board based game or more of a traditional tabletop system?

I'm letting more info about the game out now as I'm happy with where it's gotten to. The evolution of the game has been a very organic and at times, rather wild one though. It was skirmish first, but, as I saw more and more successful board game Kickstarters I thought perhaps that would be the way
to go. Also, I had some very cool ideas for making it a London based 'dungeon crawler'. But, ultimately, that would have gone away from a primary goal of Infamy - to produce beautiful resin models. So, I worked my way back to the skirmish game idea, but, with a ton of new thoughts and theories about developing that for the primary release and moving into the future. 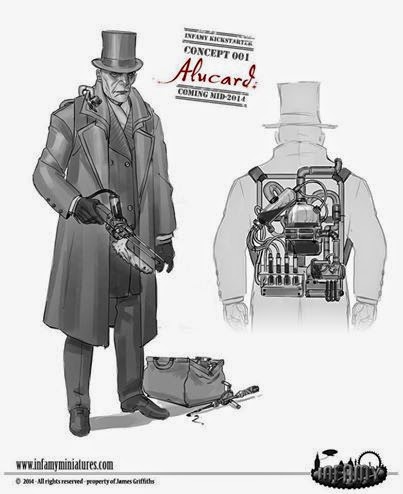 
We have seen concept art for a few leading characters from 5 factions so far, aswell has the more recent Peeler from a police force. Are there going to be others available from the start? 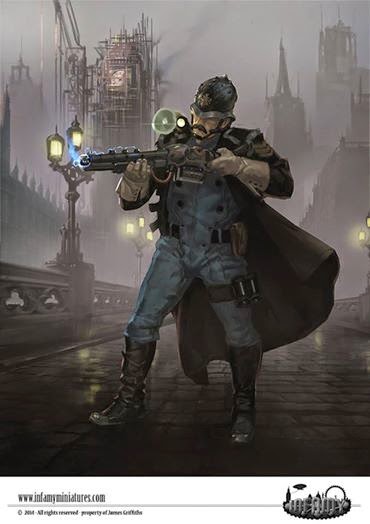 The Kickstarter campaign will have the existing models along with some unreleased minis available at first, as this is what hitting my goal target will allow me to produce and ship out. If that is surpassed there are lots of stretch goals planned and I have models sculpted or in progress/commissioned for many of these already. In total I've got eight kingpins and a very wide range of lower level characters worked out. I hope that the campaign breaks through plenty of stretch goals because some of the later models are pretty awesome! :) 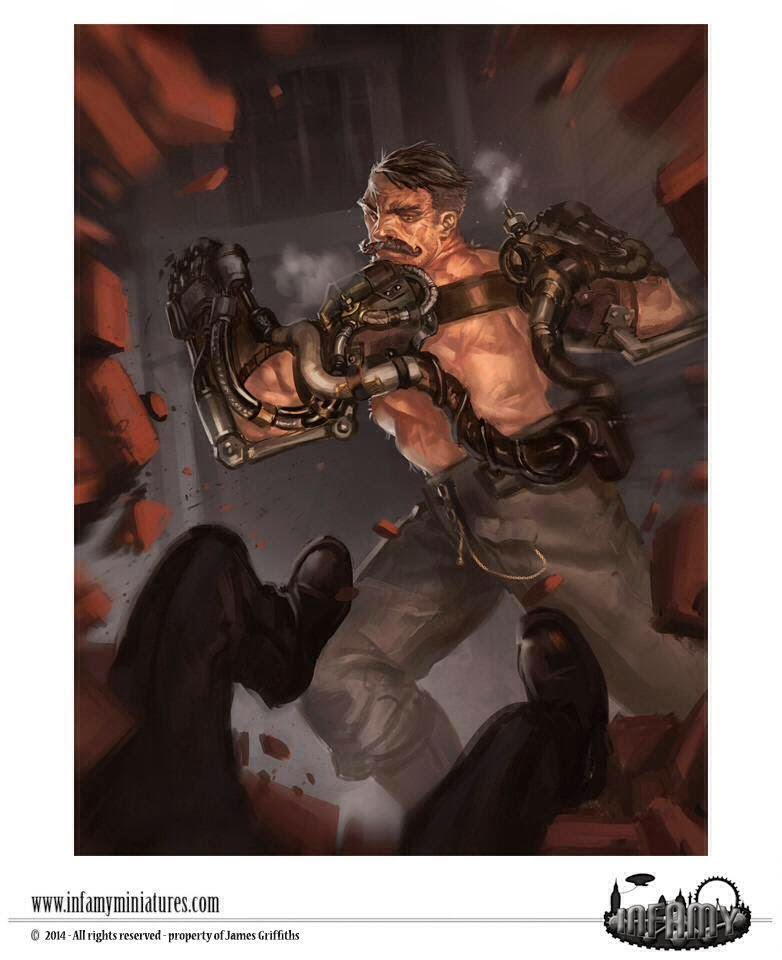 
Mikh has done fantastic work on the range so far, will he be continuing as your main sculptor or are others to be tasked with some of the upcoming models?

There have been a good few amazing sculptors involved in Infamy so far, and some of them are waiting for the KS to launch so people can see their work! I have amazing traditional and digital work done by various cool folks and I am super excited to show it all off. It's been a real challenge to keep things secret! :) Mikh's models have really been awesome so far though and his four Infamy models are mind blowing sculpts. Once he is done with a few commitments for other companies he's scheduled to do some extra stuff for Infamy!

How many models to you envisage being used in a standard game per side?

This will vary slightly depending on your kingpin, as some really synergise better with bigger groups, others in smaller more elite teams. You can play a good game of Infamy with anywhere from three or more models a side though. In fact, there are a few big characters and machines that are powerful
enough to hold their own and take on a gang by themselves.


Will retailers be able to back the ks or pick up the game for release?

To keep the KS streamlined and as simple as possible, I won't be including retail options. I plan on that being part of my strategy in the period just after I fulfil the backer's orders though. Those are the main priority, then I can approach retail options properly. I really want to get Infamy into
stores, but, it's the basic backers who can make this campaign a success, so I have to do right by them first. As for getting the game for release, Infamy will be a living rulebook online rather than a locked-in printed tome at first. This means that I can continue to refine the rules and people don't end up with a rulebook that is redundant very quickly. There will be printed rules, but, not until some time after the KS.


Do you have a start date ready for the campaign?

I do have a date in mind but, due to a few things that could still make it shift slightly, I'm currently saying mid-2014. Barring disaster, July is looking likely, but it could change up.


Will all the characters be "evil twin universe" parodies of existing literary figures or will we finally see some decent, honest folk haha?

I don't really think too many of the existing characters are just 'evil twin universe' parodies! I can completely understand why it would seem that way based on what I've shown and talked about, but what's been seen so far are very broad strokes. There are tens of thousands of words of stories,
background and history worked out that give the different kingpins motivations beyond being an evil sort! :) Many of them are more tragic than evil in my mind. Henrietta Jekyll, plagued by unfortunate events when all she was attempting was to help her brutalised sister. Uncle John, a senile old man with no real idea of the carnage he leaves in his wake.

But, the Big Smoke is not a particularly nice or stable place and there's some severe civil unrest, so it's not easy to be decent! For now the game and world is focused on some of the annexed areas of the city where the gang violence and chaos is most potent. If all goes well, it will expand much further! 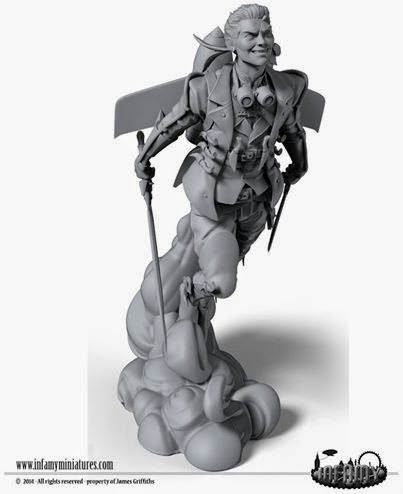 
Will the game be supported by a regular release schedule?

That's the hope. Once the Kickstarter is done I'll be focused on fulfilment. I already have various production channels investigated and ready, so I'm hopeful I can get orders out for the estimated date (though before is my ultimate goal). Once that happens, backers will have plenty to be getting on
with and I will do a staggered release of all the KS models to retail, while developing more characters, rules and other cool stuff. I admire Wyrd a great deal and would love to get to a point where I can be releasing some cool stuff every month. It just depends on demand.


Infamy is obviously a project close to your heart, has it been an enjoyable process getting ready for the big project?

Yes and no! There are times when it's just about the greatest thrill ever. Seeing ideas becoming amazing art or beautiful sculpts, that's a wonderful experience! But, there's an awful lot to do! I'm working late nights and long hours and the email queue never seems to get any shorter! There's
stress involved because of that, but it's manageable for the most part and when it all gets a bit intense my mates and especially my awesome, understanding, enthusiastic and inspirational girlfriend (there is actually a character in the range based on her!) keep me going and remind me that what I'm doing is worthwhile.


I imagine you have received a lot of support from your Brindie brothers with the game?

Alex, Alan and Joe are all such awesome dudes and without that collective I don't think any of us would have reached the points that we have. 2014 has been particularly crazy for us all, with loads of developments and progress.
There's exciting stuff to come from White Dragon with Shattered Void, JoeK Minis with his soon to launch Paul Bonner Troll KS and a game project in the works after that. Alex's ArcWorlde Kickstarter went crazy last year and things are finally slotting into place very nicely there. I've worked closely with him on rules, and the two of us have pretty much redesigned the game since his campaign finished. That's been a great process and I think we have come up with some quality ideas. Some of those will be present in Infamy too.

Yes, we certainly bounce ideas off each other a lot (the Facebook message thread between us is over 18k messages long!), but, it's the times we meet up and just talk general nonsense that I really think Brindie gives the most support. We have that close knit friendship that is only forged in adverse
conditions where you have a shared pain - that of running a mini company! ;)


Can you offer any advice to other eager gamers with an idea in their heads?

Seek advice from others, make sure you're full of passion, drive, have brilliant people around you to keep you going and, be ready to invest any/all of your time/money into it if you want to make it as good as it can be! Infamy hasn't made me a penny of profit since I launched it and any money that's come back has gone straight into developing more of the range. All my savings are invested in this along with a bit more on top. That's kinda scary and I guess it takes a certain kind of mind to do that and stay sane (ish) so be ready. But, the rewards are worth it. This is an absolutely ridiculous amount of fun! Infamy is the only work I've ever done where the files attached to business emails make me giggle with joy because the contents are so cool. :)


Thanks your time James, best of luck with the campaign!


More details of the campaign will show up in due course, and I have the Toad and Chee Chee to paint up hopefully in time for it to start so regular Infamy updates will be appearing :-D
Posted by Ridmasta at 13:38