One final addition to my Nurgle forces with one of the Maggoth lords: 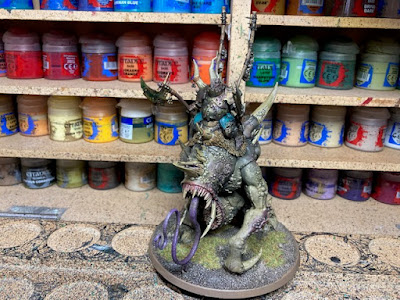 Orghotts Daemonspew is the leader type one of the three Maggoth Lords: he's not particularly good at fighting but he does have a decent command ability with reroll wounds! Crucially as well he is cheap at 220pts, has a base 3+ save with 12 wounds and as a hero monster he has full access to heroic actions and monstrous actions.
Hes also fast enough to keep up with stuff like Blightlords or a Corruptor for some balance tipping rerolls with his being a hero phase comman ability so it can stack with all out attack or defence etc.