Age of Sigmar: Finishing of the Khorne Heroes

These two are the last of my Khorne Bloodbound Heroes (I have a few Daemon ones), there are a few other direct only variants on the Deathbringers but im in no rush for them at the moment: 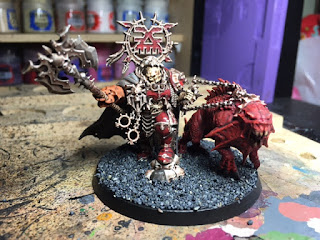 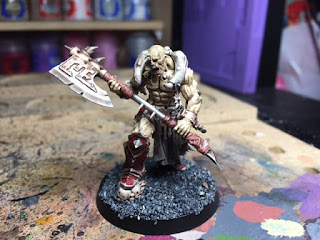 The Mighty Lord is a solid beatstick character with a good command ability to speed up multiple units, and he can potentially one shot any model in the game with his axe of khorne being able to send a wounded model into the Realm of Chaos on a 5+ haha

This Slaughter Priest has a different weapon from my other one but is otherwise no different. I need at least two priests to run the Gore Pilgrims formation that will form the core of my force.

Its on now to either the Skullcrushers or a Korgorath next...
Posted by Ridmasta at 15:06

Email ThisBlogThis!Share to TwitterShare to FacebookShare to Pinterest
Labels: Age of Sigmar, Khorne