As i said in an earlier post, i have been commissioned to paint up the Dreadball demo set for Cymbeline Games. Im starting on the Corporation team first, the Trontek 29ers, as being a mostly metallic scheme, so i can get it done before my xmas dinner is ready hehe. 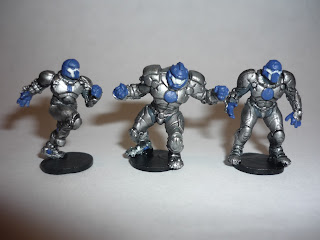 The full team is 4 strikers (left), 2 guards (center) and 4 jacks (right), they are identical sculpts so i'll just show one of each until the team is completed.
When these are done i have the Referee and the Greenmoon Smackers Orx team to do. They are a bit more involved so will wait till after xmas is done for them.
I have my own copy of dreadball so i will be getting my own teams done in the near future. As mine is not a demo set i have free run on colours, so expect the Galaxy Ace's and the Obliterator Orx to arrive early next year!
Ive had a brief run thru of the rules and it looks really good so far, the teams are quite balanced against each other and the league rules look entertaining. The Bunker will have its league on the go next year, and as the games are quick to play, we can get a league round done in a meeting and a whole league in 6 weeks easy.﻿
Posted by Ridmasta at 23:01