So that little spoiler shown at Steamcon 2016 has finally been allowed to bloom and the guys at Steamforged have unveiled Godtear to the world in the 2017 keynote speech!!!

The game centres around "Champions", heroes with the power and ability to use Godtears (Relics from the destruction of the Gods in a previous age), and their groups of lesser warriors and minions.

Below is the art for four of the Champions and the forces they will bring to the board:

Rhodri and the Household Guard

A regular game is stated to be three Champions with followers, which could be larger units of weaker fighters or maybe one stronger one like the Rock Golem.... Creates a lot of list building combinations which for me is awesome.. and leads nicely on to this: 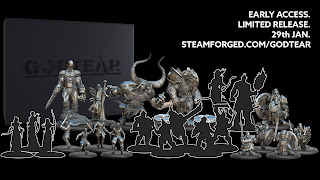 This... This has to be bought! This early release pack includes six champions and seventeen followers in addition to Raeth's Whirlpools. Straight of the bat this gives you two forces that we will be able to mix up in play testing.

Some info from seminars has appeared online, here is a rough trasnscript:

1. Overall seems a quite simple stripped down version of guild ball mechanics. You roll small pools of custom dice that give you a result in terms of both damage (number if pips on the dice) and hits (number of non-blank dice).

2. The equivalent of momentum is not specific to models, but killing enemies or manipulating the objective mechanic score you battle points. Earning battle points moves a marker on a track between the players so you can only get so far above the opponent and there's no "draw." Winning a turn earns you VP. Turn 1 is worth 1 VP, turn 2=2, turn 3=3, turn 4=2 and turn 5=1. Winner is first to 5vp.

3. Plays on a hex board. 3 small follower models can fit in one hex, but the masters and big monsters seem to all be on bigger bases. Minions can group up in up to 3s bit can spread out of they want. Being grouped means you roll more dice, so you're more likely to deal more damage, but it means a big attack could take out more of your guys in a single attack. Spreading out could help you block hexes.

4. The his tear is a big 3 hex area that grows during the game. Only champions can enter the godtear hexes, and as an action you can plant your flag in a god tear hex to earn a battle point. If your opponent tramples it they gain 2, but if you can hold it to the end of the turn you score 3.

5. Most if the opportunity for hanky effects is going to be in the champions special rules. We same the minotaur whip the dwarf - he didn't manage to do any damage but did push him back to the edge of the board (no pushing off the board).

5. There's two phases, first is a strategy phase where IIRC the first player does all their moves and other strategy actions (like plant a flag in a god tear), the second phase is alternating activations where each model may get to move again and gets to attack. Most of the champions attacks seem to debuff a stat as well as deal damage, and maybe other jank like the minatour's push