Today is International Tabletop Gaming day, so what better place for a day pass to be spent than playing Bushido at TTN!


I turned up at opening time with many other eager gamers to see what Wayland had instore for us... and we weren't disappointed... 20+ participation games including several with the developers! My mates at JAG were running several games including Bushido, Carvevale, SAGA and Dystopian Wars, and after a quick catch up with some old friends it was time for some hot Bushido action....

Battle 1 vs Brian's Cult: 35pts
We played the escort scenario, Sakura and Ikiryo, a big scrap erupted on the bridge between the Kairai, Itsu, Bushi and Akimoto. One Bushi was zapped with Ikiryo's stink eye, but Kato had moved too far forward and was hacked apart by Itsu with ease!
This marked the end of the Cult as Ikiyo rolled badly to stink eye Itsu, and was dispatched with a swift swipe hehe. It was then a simple matter to hold up the Kairai as Sakura sprinted up field... Victory to the Ito :-D 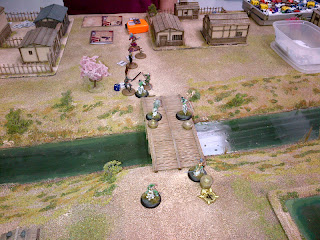 Battle 2 vs Jon's Savage Wave
Jon wanted to try out an Oni force so three big red badasses faced off against my Ito. The ogres sprinted upfield, Bobata takig the lead with Zuba and Waka flanking him... Big B swung his bell and crushed a poor Bushi flat! It was time for Itsu to do his thing and with some epic dice he managed to one shot Bobata hahaha.
This joy was short lived as Zuba got the charge on an exhausted Itsu and returned the favour... hammering the offending snake lover into a pancake :-(
His legacy of poison, combined with a heroic dice storm from Akimoto was enough to see off the Oni. This left Waka, who was dancing with the surving Bushi to little effect, until i was able to channel a lot of kii into him and buff some dice to finish him.... Victory to the Ito :-D
﻿
﻿ 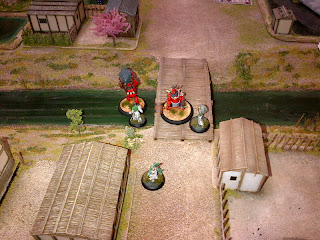 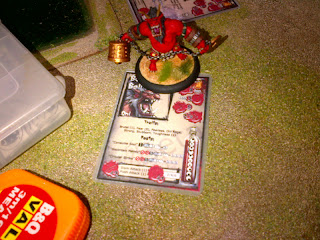 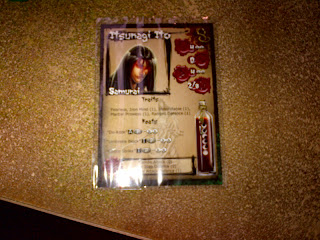 A great day was had, i had some time to check out the other games the JAG boys were playing; Canada Steve and Martin were clashing on the high seas of Dystopian Wars... as i left it was Martin's British in a bad way to Steve's Frenchies! Chris and Martin were looting and pillaging with SAGA, the dark age skirmish system. I have played this before a few times and may visit it again in the future... Chris mentioned a crusaded era version being put into production which really sounds interesting.
Hopefully another event like this is on the cards soon, and the Relics Expo is coming up in May which im very much looking forward too.﻿