Two iconic characters from the Avengers; one got a leaked card but no model, the other (Warmachine) had neither, but a fan created card exists on the custom facebook group that looks usable and balanced enough: 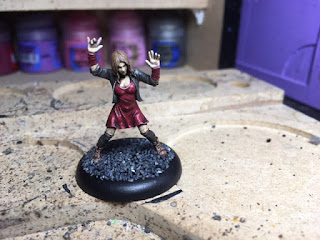 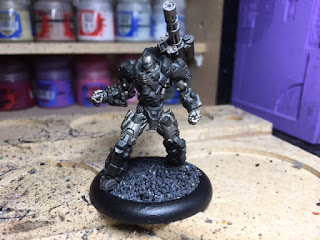 This movie version of Scarlet Witch is Jinx from Hasslefree Miniatures modern adventurers series, she is much smaller than a regular 35mm Knight model but she can work as a teenager easy enough.

Warmachine is based off an Infinity Haqquislam Azra'il model with a Hasslefree mini gun attached to the shoulder. The head is from a spare Iron Patriot i have from a dark avengers set i picked up for conversion purposes.

Email ThisBlogThis!Share to TwitterShare to FacebookShare to Pinterest
Labels: DC and Marvel