Lords of War Tourney for a Birthday Party... Genius!

Regular readers will know that Jacob and i are pretty mad for Lords of War and its probably the game we play most together out of all that he is able to. The simple rules and easy to follow mechanics make it ideal for any gamer, and Jacob has often taken his sets into school on end of term game days and taught his mates how to play!

Earlier this year Jacob said he would like to have some friends over to play Lords of War for his birthday, and he asked if i could set it up as a proper tournament for them which of course i said yes as it was a great plan haha.

In passing at Salute i mentioned to Martin (Of Black Box Games) that we were doing an LoW party for Jacobs birthday and he thought this was an amazing idea too... Roll on to November and a big box of LoW goodies arrived at our door from Nick & Martin, packed full of posters, gaming mats for the boys, some tshirts and one massive stack of shinny command cards for prizes!


So yesterday was the big day and Jacob and i transformed our bunker into a venue fitting for such an epic clash of Generals: 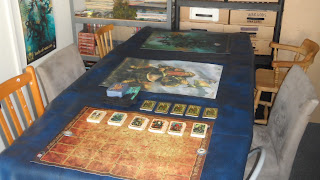 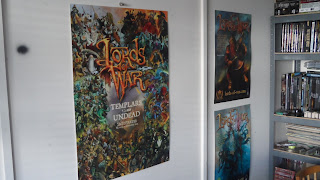 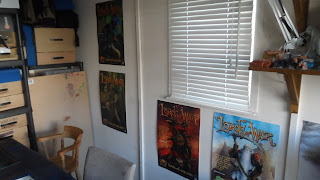 Round 1 was ready to kick off as our mighty generals faced off across the fields of war! The boys were all excited to take part in a proper tournament with me officiating and solving rules questions: 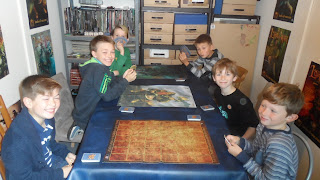 Round 1 drawing to a close with victories for the Dwarves, Undead and Lizardmen: 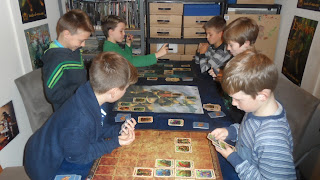 Round 2 ready to start after consuming some cookies of ultimate strength and the malteasers of destiny! 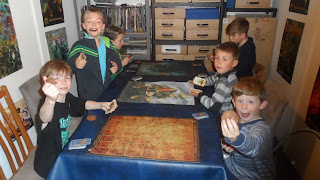 Round 2 in full swing as strategies learned in game 1 are used and refined against new opposition with desperate combat erupting across the land... this round saw victories for the Dwarves, Undead and Elves: 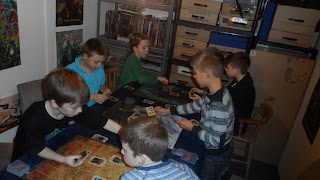 Our Generals required more sustenance for the final conflicts ahead... Jacket Potatoes of Wisdom aided by the Cheese and Beans of Justice : 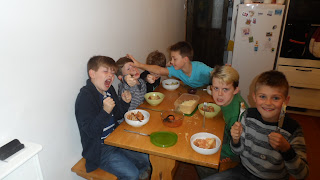 Round 3 and the last great battles of our time were being waged as darkness drew close, long were the struggles and valiant were all our generals but victories were had by Dwarven, Lizardmen and Elvish commanders: 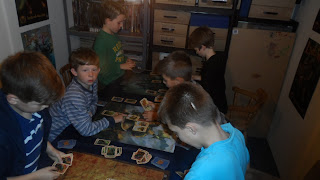 After a total up of the points scored using the official LoW system Jacob had won, but he had beforehand decided to pass on the winners prizes to the second place if he won as he had received his own tshirt, posters and shiny commander cards from Nick & Martin. Victorious instead was George her receiving his tshirt from Jacob and with a tin and full set of Dwarven Commander shinies. All of Jacob's friends took home a mat and a selection of shiny commanders along with badges: 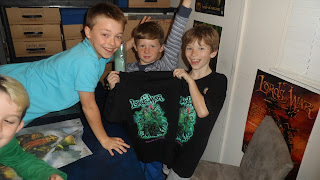 They all had a great time and have begun bugging their parents for card packs of their own haha, they all wish for this to become a regular event so we are planning the next tourney for the Christmas holidays or early new year.

If you haven't played lords of war yet i cannot recommend it enough, its a lot of fun, easy to pick up, many many hours of play for the entire family not just hardened gamers.

Myself, Jacob and my wife Emma would like to thank Nick & Martin for helping to make Jacobs party such a great event and we look forward to the new challenges that the Undead vs Templars expansion pack will bring to our games! Cheers guys!

Email ThisBlogThis!Share to TwitterShare to FacebookShare to Pinterest
Labels: Jacob, Lords of War